Home » MLB » Can either of these teams win the AL East? How Red Sox, Yankees are overachieving — and underachieving 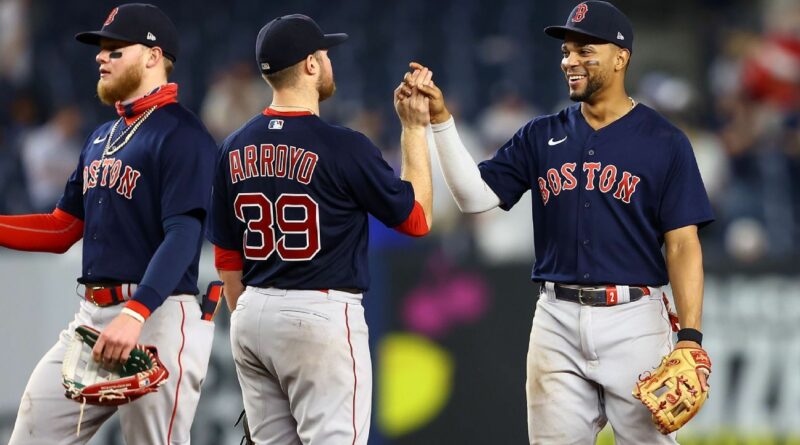 Coming into the 2021 MLB season, many baseball observers considered the American League East the New York Yankees’ division to lose. Fast forward two months and New York is looking up in the standings at three teams — the Toronto Blue Jays, Boston Red Sox and Tampa Bay Rays. The Yankees’ lineup on paper looked to be the team’s strength, with question marks surrounding their rotation.

Instead, the opposite has played out. New York ranks among the lowest-scoring teams in the majors and has had to lean heavily on its starting pitching, behind strong performances from Gerrit Cole, Domingo German, Jordan Montgomery and the now-injured Corey Kluber. The Yankees head into Sunday just three games over .500 — with a run differential of minus-3.

Meanwhile, Boston is in the heart of the race for the division, trailing the first-place Rays by just one game, something very few had predicted. Fueled by the rebound performance of J.D. Martinez and Rafael Devers in addition to the slugging of Xander Bogaerts, who is playing like the best offensive shortstop in baseball, Boston’s offense ranks fourth in the majors in runs scored. The rotation has so far been anchored by its depth, with Nick Pivetta, Garrett Richards and Martin Perez currently providing consistent outings every time out.

As they wrap up their first series of 2021 with Boston eyeing a potential three-game sweep, here’s how each team got here, what’s real and what’s not, and whether the division will continue looking like this moving forward.

How they’ve overachieving so far: The Yankees’ pitching staff was a wild card coming into the season, with the return of German (3.27 ERA, 1.04 WHIP in 55 innings in 2021) from a yearlong suspension for violating the league’s domestic violence protocols, and the offseason acquisitions of Kluber (3.04 ERA in 53.1 innings, not to mention the franchise’s first no-hitter since David Cone’s perfect game in 1999) and Jameson Taillon (5.09 ERA in 53 innings), each of whom hadn’t pitched a full season since 2018.

But the Yankees rank second in the American League and sixth in baseball in team ERA — trailing only the Padres, Mets, Dodgers, Giants and White Sox — with Cole (2.26 ERA, 0.87 WHIP, 104 strikeouts in 75.2 innings) remaining the unquestioned ace and one of MLB’s best pitchers. Injuries — particularly the loss of Kluber for potentially two months due to a shoulder strain — puts the pitching staff on much shakier ground heading into the summer.

“Our pitching has been everything we could’ve hoped for at this point. I think the starters have been really solid,” Yankees manager Aaron Boone said. “The bullpen has been excellent, and we’ve seen guys emerge and create larger roles for themselves. We look forward to getting guys like [Zack Britton] and [Justin Wilson] and [Darren O’Day] back, but in the meantime, some guys have really stepped up in the bullpen. Overall, I think the pitching has been excellent.”

Closer Aroldis Chapman, who sports a 0.41 ERA with 42 strikeouts in 22 innings this season, continues to anchor a strong bullpen, one of the team’s consistent strengths over the past few seasons. Even with Britton, Wilson and O’Day on the injured list, Boone has relied on Jonathan Loaisiga (2.08 ERA, 1.09 WHIP in 30.1 innings) and Chad Green (3.14 ERA, 0.87 WHIP in 28.2 innings) for strong performances.

How they’re underachieving so far: Given the number of sluggers on the roster, the Yankees certainly did not expect to rank among the lowest-scoring teams in baseball. The Bronx Bombers rank fifth to last in baseball in runs scored so far this season, ahead of only the Mets, Pirates, Nationals and Tigers.

Boone said he does not expect the team’s offensive struggles to last the entire season.

“The offense, after getting off to a slow start, is trending up a little bit, and then we’ve had our struggles again, so that’s the area where we’re looking to find more consistency,” Boone said. “I think I feel like over the long haul, it’s going to be an overwhelming strength for this team.”

“You see the guys on our team? That gives me a lot of confidence,” Boone said when asked what made him confident about the team’s offense turning around. “Guys that are really talented, really care about what they’re doing and have a track record of doing. It’s been a grind so far, but that’s all part of the team. It’s not always going to be easy, and hitting in 2021 is probably as hard as it’s ever been, but I have a lot of faith in those guys that eventually we’re going to really get it rolling, and I feel like that’s starting to happen now.”

According to Red Sox manager Alex Cora, that sense of calm and lack of panic is what makes Boone the right personality to manage the Yankees and help course-correct the ship in a market with extreme scrutiny from the media and fans.

“Booney never panics,” Cora said. “He’s been very calm, and I know they’ve had their ups and downs. In Boston and New York, it can get very heavy, and he doesn’t deviate from who he is. I think he’s done an amazing job the last few years of staying the course and doing his thing, and this is the same guy, he did it on TV too. You listen to him on Sunday Night Baseball and it was very calm and very relaxed and sending the message to the audience, and that’s what he’s doing with the Yankees and I’m very proud of that.”

Player to keep a close eye on: DJ LeMahieu set the bar high during his first two seasons with the Yankees, earning two Silver Slugger Awards and two top-four MVP finishes. That version of LeMahieu has not shown up so far for New York this season, hitting .259/.339/.329 with just three homers and six doubles in 216 at-bats. That’s a steep drop-off from his 2020 performance, when he hit .364/.421/.590 with 10 homers and 27 RBIs and joined Lou Gehrig, Joe DiMaggio and Mickey Mantle as the only Yankees to lead the majors in batting average.

What needs to happen for the Yankees to win the division: Simply put, the offense needs to live up to its potential. The injury to Kluber illustrates the fragility of the rotation, and the team will struggle to find success if Aaron Judge is the only player consistently producing. The trio of LeMahieu, Giancarlo Stanton and Gleyber Torres needs to step up at the plate.

The team’s frustration with the offense is starting to boil over into the public.

“It’d be nice to pitch with a lead, but that’s how it’s going right now,” Taillon said after a recent loss to the Rays. “It’s my job to go out there and put up zeroes.”

How they’re overachieving so far: In a rotation with Nathan Eovaldi and Eduardo Rodriguez, the Red Sox starter currently sporting the team’s best ERA is — *wipes glasses* — Perez (3.09), who entered the season as the team’s fifth starter.

That surprising turn of events sums up the current state of the team’s pitching rotation. Boston continues to lean on the depth of its rotation: Perez, Pivetta (3.77) and Richards (3.75) all sport better ERAs than Eovaldi (3.78) and Rodriguez (5.59).

“We felt like our pitching was solid. We felt like the rotation was going to give us a chance throughout the season to be in ballgames. There were a lot of question marks coming in from outside of our world,” Cora said. “Rightfully so. I get it. But if you actually break it down, our rotation, you’ve got Eduardo, who right now is struggling. He’s done it before. Nate is solid. Richards with upside, Pivetta with upside and Martin, a solid big leaguer. We felt like coming into the season, five or six innings, we were expecting this from them.”

The team also continues to get solid performance out of its bullpen, with Rule-5 pick Garrett Whitlock looking like one of the team’s best acquisitions of the offseason, with a 1.63 ERA and 29 strikeouts in 27.2 innings over 15 appearances. Other bright spots include closer Matt Barnes, who has a 2.49 ERA and 0.63 WHIP in 25 games, Adam Ottavino, who has a 2.78 ERA in 26 games and Hirokazu Sawamura, who has a 2.78 ERA in 21 games this season after coming over from Nippon Professional Baseball.

How they’re underachieving so far:

While Boston boasts one of baseball’s best offenses so far this season, ranking fifth in runs scored behind the Dodgers, Astros, Rays and White Sox, Cora believes the team is not performing up to its full potential at the plate. Heading into the Yankees series, Boston dropped three of four to the Astros, scoring just four runs over the first three games before putting up a five-spot in the finale. Since May 21, lineup anchor Martinez has knocked in just two runs, emblematic of the team’s recent inability to put itself in a position to score.

“We’re expanding too much to the edges of the strike zone,” Cora said. “That’s a recipe for disaster at this level. In [the Astros] series, we chased 38% of pitches, and that’s not good. We gotta get back to swinging at strikes and keeping the lineup moving. That’s something we did earlier in the season, and we know we can do it.”

Boone said that despite Boston’s recent offensive struggles, the team’s attention to detail will make it a force to be reckoned with throughout the rest of the season.

“I think [Cora has] created a culture where it’s a team that pays really close attention to the details,” Boone said. “He sees the game really well. He’s fearless. I think he’s really good at what he does. I think his players certainly reflect that and play with a confidence that he kind of sets that tone for them on a daily basis.”

Player to keep a close eye on: Rookie first baseman Bobby Dalbec, who hit a tape-measure home run on Saturday night, has been a disappointment overall at the plate so far, hitting .199/.248/.384 with six homers in 46 games. Dalbec garnered hype as a potential Rookie of the Year candidate after impressing in his 23-game stint with Boston in 2020, hitting .263/.359/.600 with eight homers.

Dalbec is beginning to lose playing time to utility man Danny Santana and has been unable to find his rhythm. With top prospect Triston Casas also a first baseman, Dalbec’s performance over the rest of the season could determine whether he has a role in the organization moving forward.

What needs to happen for the Red Sox to win the division: Boston needs better performances out of Eovaldi — the kind they got in Friday night’s series opener — and Rodriguez, their two most established starters. With the injury history of Richards and with Pivetta and Perez outperforming their track records, the success of Eovaldi and Rodriguez would alleviate some of the pressure on the back end of the rotation to carry the Red Sox to the playoffs. 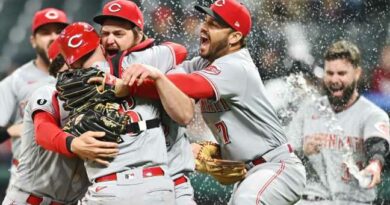