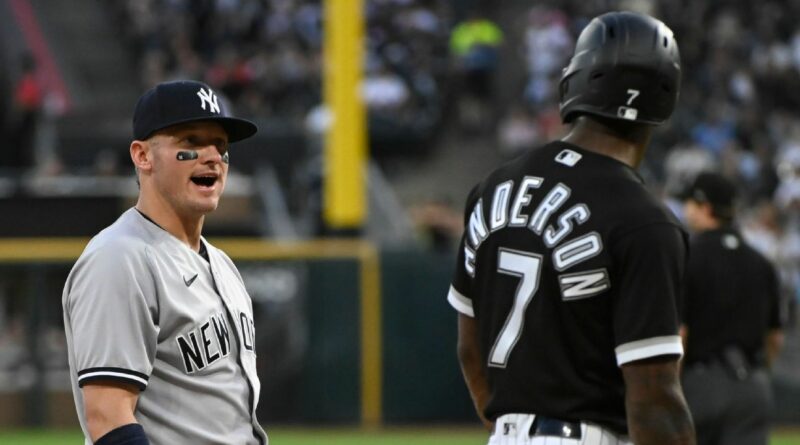 NEW YORK — Josh Donaldson was hurt when New York Yankees teammates didn’t back him after he made a remark to White Sox star Tim Anderson about Jackie Robinson that Chicago manager Tony La Russa called racist.

Donaldson was suspended for one game by Major League Baseball for making multiple references to Robinson while talking to Anderson on May 21. Donaldson has appealed the discipline.

Anderson said he agreed with La Russa, and several Yankees said Donaldson was wrong. Yankees manager Aaron Boone said: “This is just my opinion – (that’s) somewhere he should not be going.” New York star Aaron Judge said: “I just don’t think it’s the right thing to do there.”

“I think that was tough to hear, for sure, just for the simple fact that I pride myself on being a good teammate, and everywhere I’ve went, every organization that I’ve been a part of, minus Oakland, has offered me extensions, has wanted me to stay back,” Donaldson said during batting practice Wednesday.

“They’ve showed that they wanted me a part of their team. Obviously it didn’t work out that way,” he said. “And that’s just the business end of it. And also everywhere I went, I’ve won. I think part of winning is having good team chemistry, and I’ve taken pride everywhere I’ve went I’ve always tried to help people try to get better.”

A three-time All-Star and the 2015 AL MVP with Oakland, the 36-year-old Donaldson said he was surprised by criticism from White Sox reliever Liam Hendriks, his former Athletics teammate, who said he is “not a fan” of Donaldson.

Donaldson said Hendriks never brought up any issues when they met in a parking lot outside a ballpark.

“I know Liam has come out a couple times and said some stuff about me,” Donaldson said. “It’s weird because I hear one thing and then when I see him it’s different. So it’s definitely been confusing for that. I’m not saying that every one of my teammates have always been best friends with.”

Donaldson made a public apology to the Robinson family last week.

“I think everybody wanted to have a say. But they don’t know my heart,” Donaldson said. “I do feel bad that the Robinson family – I never wanted them to feel their name should ever be regarded in a bad light. That was why I issued the apology.”

He maintains of Anderson, “maybe he misinterepreted” the references but said “I haven’t had a chance to talk to him.”

“I think when it comes down to it, over the last couple of years, there’s been animosity from their team towards me,” Donaldson said. “And I don’t really have a problem with the team. I think there’s some stuff that was in question from last year.”

Last season in Chicago, Donaldson alleged ace Lucas Giolito had benefitted from the use of illegal sticky substances. He said he intends to stop his chatiness with the White Sox.

“I should not talk to these guys any more, just because I don’t ever want to be brought up in that light or that spectacle,” he said. “It’s been tough.”

Donaldson, acquired by the Yankees this year, is with his sixth big league team and is hitting .238 with five homers and 15 RBI in 37 games. He is on the injured list with right shoulder inflammation and could be activated Sunday. He was also briefly away from the team with COVID-19 following the incident with Anderson.

Donaldson had felt the shoulder pain for most of this season and says his swing has responded to a cortisone injection.

“I just have a lot of wear and tear in there over the years,” he said. “I have tears everywhere in the there. It’s old stuff that gets in the way at times.”