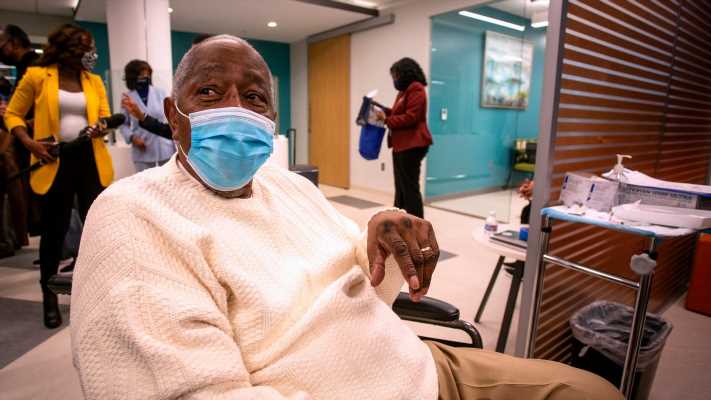 Getting vaccinated “makes me feel wonderful,” Aaron told The Associated Press. “I don’t have any qualms about it at all, you know. I feel quite proud of myself for doing something like this. … It’s just a small thing that can help zillions of people in this country.”

Rolling up their sleeves to take the first of two doses, these octogenarians, their spouses and several other civil rights leaders who received the shots in a brand-new health clinic at the Morehouse School of Medicine acknowledged the legacy of mistrust that many African Americans have toward medical research, stemming from the infamous Tuskegee experiment in which U.S. health workers left syphilis untreated in Black men without their consent, making them suffer needlessly.

“I’ve been taking vaccines now for 88 years and I haven’t been sick,” Young said. “The truth of it is, Black folk have been living by shots, and just because they did something crazy and murderous and evil back in 1931, we’re still thinking about that. We’ve got to get over that.”

The disinformation is difficult to overcome: A December survey by The Associated Press-NORC Center for Public Affairs Research showed 40% of Black people said they would not get the coronavirus vaccine. Such hesitancy is more entrenched than among white people, even though Black Americans have been hit harder by the virus.

Baseball Hall of Famer Hank Aaron waits to receive his COVID-19 vaccination on Tuesday at the Morehouse School of Medicine in Atlanta. (Photo: Ron Harris, AP)

Dr. Valerie Montgomery Rice, president and dean of the Morehouse School of Medicine, applauded Tuesday’s volunteers, calling them “trusted messengers” as the school launches a public vaccination campaign with the help of a $40 million federal grant from the HHS Office of Minority Health to fight COVID-19 in underserved communities.

Starting on Saturday, the just-opened clinic will administer its first allotment of 500 Moderna vaccines to people 75 and older who sign up through the school’s website. They’ll be able to get vaccinated by appointment, without waiting or even leaving their cars, she said. People 65 and older can get their shots days later, following state protocols.

I was proud to get the COVID-19 vaccine earlier today at Morehouse School of Medicine. I hope you do the same! https://t.co/RAlkmkCRra

“It is time for us to take charge of what is happening in our communities and lead by example,” Rice said. “The Morehouse School of Medicine was founded 47 years ago to do exactly this — to take care of our community.”

Others who got the shot on Tuesday included the mother of Atlanta Mayor Keisha Lance-Bottoms. “You know that if I’m bringing my mother to get vaccinated, that it’s safe. It’s best for our community,” the mayor said.

Young, who also served in Congress and as mayor of Atlanta, said he’s taken many vaccines while traveling to 141 nations during his career, often on missions to eradicate polio. He still remembers seeing its victims stuck in iron lungs in Warm Springs, Georgia — “It was a devastating thing to get polio,” he said — and last year, he was able to celebrate its eradication in Nigeria, administering drops to 100 mothers and their babies.

“I’m a product of vaccines. Why would I want to stop now?” Young said.

Young said he recruited Aaron and his wife, Billye Suber Aaron, to get their shots with him and Sullivan, who founded the medical school a half-century ago and later joined the Cabinet of President George H.W. Bush. The Aarons, for their part, have given more money to the medical school than the slugger made in his last five years of playing baseball, Young observed.

Young praised the new clinic, saying it will make medicine “more relevant and more safe and more available to poor folks of color.”

“I think that’s what we need all across the state of Georgia and the South,” he said.