Home » MLB » ‘He has a way of making you believe’: How Alex Cora built a championship culture

LOS ANGELES — Sunday breakfast on the best day of Alex Cora’s professional life was about what you’d expect: swanky Los Angeles hotel ballroom, eager servants, exotic proteins. The room was filled with Cora’s ballplayers and their families: children, wives, parents, the random cousin, a favored niece or nephew. There was anticipation in the room as well, this being the morning of the day they all expected to end with a win over the Dodgers in Game 5 and a World Series championship for the Red Sox. And one by one, perhaps sensing it was their last chance, the parents approached Cora, the fathers’ hands extended, the mothers angling in for a hug. They came bearing some version of the same message: “Thank you for the way you’ve treated our son.”

This was the culture Cora set out to build when he became Boston’s manager a year ago, which made the scene both humbling and a little sad. He wanted a team that felt like a family, one constructed out of tolerance and diversity and inclusion. Given the transitory nature of the game, he wanted to create an ecosystem capable of absorbing new members. This breakfast was proof that he and his players had succeeded, that what he had imagined had come true, and at one point he turned to his own family and told them — despite the chic setting — that it felt more like a high school summer-league team than a group of hardened, cynical, seen-it-all big leaguers.

That accounted for the humility, but what about the sadness? Where did it come from? Would you believe the gratitude of the parents? It drove home the fact that something special was about to come to an end.

Cora was the breakout star of the postseason. The first Puerto Rican manager to win the World Series faced the pressure that came with a 108-win regular season yet carried himself with uncommon ease. Nearly every move he made was perfect. Even the ones he regretted, such as leaving starter Eduardo Rodriguez in to give up a three-run homer to Yasiel Puig in Game 4, got covered up by the sheer dominance of his team.

“Everything he did worked,” said pitcher Nathan Eovaldi, whose folk hero World Series performance was made possible by Cora’s experimentation. “He just has a way of making you believe.”

Cora erased the lines separating relievers and starters, using Eovaldi, David Price, Rick Porcello and Chris Sale in both roles. Two of his pinch hitters, Eduardo Nunez and Mitch Moreland, hit game-defining homers. He put Steve Pearce in the third spot in baseball’s most productive lineup and watched him become an unlikely World Series MVP. He sat third baseman Rafael Devers for Game 4 after detecting, in a couple of at-bats in Game 3’s 18 innings, signs that the rookie was overmatched. “For the first time, we saw the game speed up for him,” Cora said. But he called on him in the most crucial situation of Game 4: ninth inning, 4-4 game, runner at second, and Devers lined an RBI single that put the Red Sox ahead for good. Cora’s mastery was so thorough it began to feel routine. He added prognostication to his repertoire before Game 5, predicting that Mookie Betts would break out of his prolonged World Series slump. Betts hit a home run off Clayton Kershaw in the sixth inning to put the Red Sox ahead 3-1.

At one point during the course of the series, Cora was asked an odd question: Can a manager get hot? “Nah,” he said, waving it off. “It’s the players. They make a manager look good.” And what did the players think? “He’s everything,” Sale said. “Alex is the man. He’s the best.”

When Game 5 ended with Sale’s strikeout of a flailing Manny Machado, the Red Sox rushed the field and bounced around in a clot of exuberant humanity. Cora took a first step up the dugout and toward the field before he retreated. He and his coaches turned to each other in the dugout and hugged, a grown-up celebration in a minor key. Cora, more than anyone, seemed stuck between worlds but welcome in both.

And so, at 8:32 p.m. PT, roughly 12 hours after his mind raced with the clash of emotions in the hotel ballroom, Cora — the first Puerto Rican manager and fifth rookie manager to win a World Series — stood on a raised platform and held the trophy over his head.

He went from the podium to shallow center field, where he conducted interviews in Spanish. He walked toward deep short and was stopped again, this time in English. He sat in with one postgame show after another. He took photos with his daughter and Jennifer Lopez. Through it all, he was surprisingly subdued. Those who know him best expected a less inhibited Cora; he was either subsuming his emotions beneath a flat exterior — unusual for such a vibrant personality — or so overwhelmed by the achievement that it had yet to harden into reality.

“It wasn’t as easy as it looked,” Cora said later. “One hundred and eight wins, and we knew it wasn’t enough for where we play. We knew we would be judged by our postseason.”

Indeed, there’s something nearly pathological about a fan base that gathers in the stands of a visiting ballpark or the town square to scream “Yankees suck” minutes after its team has won a championship.

The defining moment came away from the cameras, in the relative privacy of the visiting clubhouse behind first base at Dodger Stadium. The Red Sox had just lost the absurd Game 3 in 18 innings and more than seven hours. Eovaldi took the loss despite pitching six heroic innings. His selflessness moved some of his teammates to tears.

Cora walked into the clubhouse and called everyone together. He looked at each one of them and said he was grateful for their effort and proud to be part of their team.

“It was emotional,” shortstop Xander Bogaerts said. “By the end of it, we felt like we won the game.”

The manager’s role has lessened in importance over the past several years. His autonomy has diminished as front offices have taken a more active role in deciding who plays and under what circumstances. The manager is disposable, a glorified middle manager whose job is to relate to players, quell mutiny and make sure the organizational process plays out on the field. He is, in many ways, a spokesman for the team inside and outside the clubhouse. Cora’s salary — $800,000 a year, one of the lowest in baseball and akin to a rounding error on a team with a payroll of more than $228 million — speaks to this.

And yet there are no numbers to ascertain the importance of a manager’s spirit, and the way his humanity can embolden and inspire his players. Asked whether he ever gets angry with his players — in other words: Is your calm exterior an elaborate lie? — he said, “No, I don’t. I talk to them. If I have something to tell them, I just sit with them. Casual, very casual. I try to have good conversations.” Cora has been a relentless advocate for Puerto Rico — and a critic of the Trump administration — in the wake of Hurricane Maria. (After Sunday’s game, he said he would not commit to a White House visit, saying “We’ll talk about it later on.”) He included just one demand in his contract negotiations: that the Red Sox charter a plane of relief supplies to his hometown of Caguas. He conducted each World Series news conference — cognizant of the cameras — wearing a different T-shirt that carried the same message: The Red Sox were representing both Boston and Puerto Rico.

Everybody always wants to know about influences. Baseball, more than any other sport, prides itself on its forebears and mentors. The game is not capable of being learned organically but is instead like a sacred text, or maybe a cherished family recipe, passed through generations only to its worthiest recipients. Those who are anointed must reveal their sources. Who was the first to identify your gift? Who taught you how to deal with players? Give us the name of the shaman who first whispered your name and shared the mystical secrets of the lineup card.

Cora gets asked about this a lot, perhaps because of baseball’s rich cultural heritage in Latin America, perhaps because nobody has much of an imagination anymore. He deals in the usual bromides — he learned something from every manager he played for or worked under — but there is a constant: he always finds his way back to the winter of 2000 and the season he spent playing for Sandy Alomar Sr. in their mutual hometown of Caguas.

“The game will always tell you something,” Alomar told Cora, then 25. “You just have to pay attention.”

The game’s rhythms and secrets — the way a pitcher grinds the ball into his glove before he throws a curveball, the way a catcher carelessly lobs the ball back to the pitcher with runners on base, the way a shortstop cheats a little to his left or right after reading the catcher’s signs — will reveal themselves over time. The careful observer can sense the less tangible dynamics — how a player responds to criticism, who is willing to sacrifice for the greater good, what a team needs to hear after a devastating loss. Eventually, a full picture will emerge. And when that happens, when you watch closely enough for a long enough period of time to absorb its many lessons, there’s a chance you might someday get to tell the game something in return.

Clayton Kershaw’s playoff stats, explained: Why does the Dodgers great struggle in the postseason? 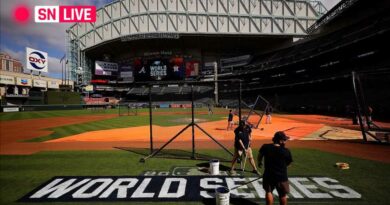 Astros vs. Braves live score, updates, highlights from Game 1 of the 2021 World Series