CHICAGO — There won’t be a reunion between Albert Pujols and his old manager as Chicago White Sox skipper Tony La Russa indicated Pujols won’t be joining him in Chicago.

“We have Jose (Abreu) and Yermin (Mercedes) and even if Yermin gets less hot, it’s a good way to DH other guys, get them off their feet,” La Russa said Friday afternoon. “There is no fit here, unfortunately.”

La Russa managed Pujols in St. Louis for the first 11 years of his career before the future hall of fame slugger joined the Los Angeles Angels as a free agent. He and La Russa have stayed closer over the years with the manager even joining the Angels last season as an advisor before accepting the White Sox managerial job in 2021.

The two talked on Thursday, after the Angels designated Pujols for assignment.

“He really believes — and if he believes I believe — he’s got game left,” La Russa said. “I’ll be very interested to see if a club sees the fit because they’ll get a very determined Albert.”

Pujols was hitting .198 with five home runs before the Angels designated him. If they don’t trade him in the next week, he’ll become a free agent.

The White Sox have lost two middle of the lineup bats to injury since spring training, including centerfielder Luis Robert just last Sunday. But they have the reigning MVP in Jose Abreu at first base and the reigning rookie of the month, Yermin Mercedes, playing DH. There’s no room for playing time for Pujols.

La Russa is hopeful he lands somewhere outside the Sox’s division.

“He wants to be playing,” La Russa said. “They’ll get a very determined Albert. I would never underestimate him. “He is one of the games great, winning competitive players.”

Gerrit Cole ‘flattered’ by John Smoltz saying Astros rotation better than ’90s Braves: We have a ways to go 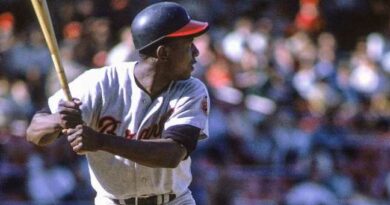 755 home runs and even better than you remember: Hank Aaron was one of the five best MLB players ever