Question: Why do athletes in other sports seem drawn to batting practice in major-league stadiums? Answer: It’s because they want to hit home runs.

A related question: Why are we always transfixed when non-baseball athletes swing the bat? Answer: It’s because we want to see them hit home runs.

Chicks dig the long ball, and so does everyone else.

But why are we all about the dingers? Why that allure? It’s because the home run is still the ultimate, most celebrated individual accomplishment in all of sports. Forget the Hail Mary. Forget the half-court buzzer-beater. Forget the hole-in-one. The home run is king, and everyone knows it.

I started thinking about this on Monday when MLB’s Twitter account tweeted a birthday greeting to the New York Giants’ Odell Beckham Jr., showing him hitting a batting-practice dinger in Anaheim. It’s cool, no doubt. But think about it: Why do we never see basketball players trying to kick field goals for the cameras? Or quarterbacks trying to hit 3-pointers? It’s always non-baseball-playing athletes taking swings in the cage that gets everyone’s attention.

On @obj’s 26th birthday, a reminder that he can mash. ? pic.twitter.com/qQsBgCKsw7

It’s simple, really: Home runs have always been — and will always be — the biggest of big deals. Everyone who has ever picked up a bat has wanted to hit the ball over the fence. Doing so demonstrates a certain mastery of the situation, an ability to achieve maximum individual success. Nothing else in any team sport comes close. That’s why, despite their massive accomplishments within their own sports, elite athletes like Beckham, J.J. Watt, Blake Griffin and many others love to swing away to see whether they have what it takes to tame a ball with a bat — still the hardest routine act in sports.

This is also why home run terminology transcends baseball — and sports.

We often hear football analysts heap praise by saying, “He’s a real home run hitter.” We hear political analysts praise a speech by saying, “She really hit it out of the park.” No matter the context, the meaning is clear: They’re good. They’ve won. A great thing happened. It’s an understood shorthand for the ultimate in individual success.

I’m not saying other athletes have never shown off for cameras by sinking a long 3-pointer or attempting a field goal. But the most consistent “Ooooh, aaaah” moments in the low-stakes world of athletes trying other sports is when a football player or a basketball player makes good contact off 60 mph BP heat and leaves the yard.

Buckets and touchdowns don’t quite carry the prestige or the “Hey, look at me” power of a good long ball. And they probably never will.

Yes, the home run is king, even in other sports, even outside of sports. 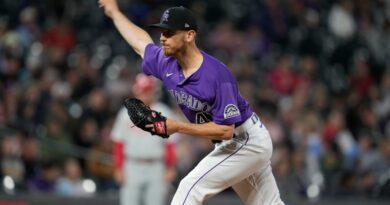