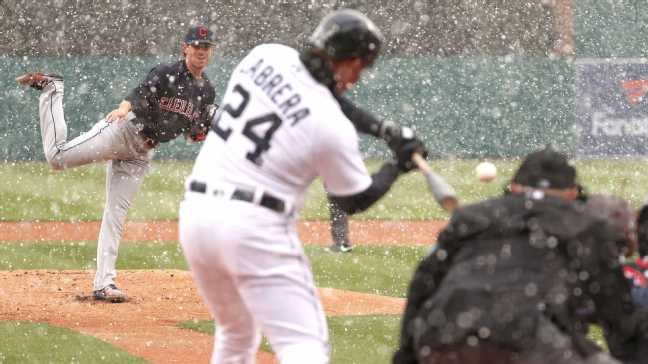 Happy Opening Day! As the 2021 MLB season officially begins, we’re tracking the key takeaways and signature moments from each game across the country.

Beginning with a snow-filled AL Central matchup in Detroit and a Hyun-Jin Ryu vs. Gerrit Cole pitching showdown in New York, there has been plenty to talk about right from the start of the new season.

It hasn’t all gone smoothly as baseball returns to a full 162-game schedule from a pandemic-shortened 2020 season, though, as the Boston Red Sox’s home opener against the Baltimore Orioles was postponed due to rain and the Washington Nationals-New York Mets matchup in D.C. was postponed due to COVID-19 issues.

Here are the only-in-baseball moments, must-see plays and overarching themes that have caught our eye on the first day of the 2021 season.

Miguel Cabrera swings (and slides) through the snow

As if we needed to be reminded that anything can happen at any time in baseball, a stark refresher of that truism was gifted to us on a snowy day in Detroit, early in one of the first games of the 2021 MLB season.

On the mound was Cleveland righthander Shane Bieber, who dominated his way through the short 2020 season, going 8-1 with a 1.63 ERA en route to his first AL Cy Young Award. At the plate was future Hall of Famer Miguel Cabrera, the face of the Tigers, who has battled age and injury in recent seasons as he pursues historic milestones for a rebuilding franchise.

Accentuating that frozen moment — the pun is intended — was a snowfall at Comerica Park so thick that you couldn’t tell at first that what was about to happen actually did happen.

With two outs and Jeimer Candelario at first base, Bieber threw a fastball in the upper outside quadrant of the strike zone. Cabrera lashed at it, sending a drive to right field. On the broadcast, it was impossible to tell what was the ball and what was snow, but the ball just cleared the railing in right field.

Not realizing that he had indeed just hit career home run No. 488, Cabrera — and though the game was played on April 1, this was no April Fools’ joke — slid into second base. — Bradford Doolittle