After an 18-inning marathon on Friday night, the Boston Red Sox and Los Angeles Dodgers will both be challenged tactically in Game 4 of the World Series on Saturday night. With pitching staffs taxed and lineups exhausted, setting your MLB DFS lineups will be tough. However, with FanDuel offering a $75,000 World Series Special, DraftKings offering a $100,000 Championship Series Special and hundreds of other MLB DFS tournaments and cash games, it’s worth taking the time to construct the optimal lineup. That’s why you’ll want to see the MLB DFS picks from DFS expert Mike McClure before you make any decisions for Saturday night. He’s won nearly $2 million in his career as a professional DFS player and you can find his lineups exclusively on SportsLine.

And when it comes to MLB, McClure is at his absolute best. Recognized in the book “Fantasy Football (and Baseball) for Smart People: How to Turn Your Hobby into a Fortune” as a top MLB DFS player, McClure is rolling this season, already producing multiple tournament lineups that have won big thanks to some spot-on picks.

In Game 3 of the World Series on Wednesday, McClure rostered Dodgers pitcher Walker Buehler. The result? Buehler threw seven innings of two-hit, shutout ball and struck out seven. Anybody who had him in their lineup was well on the way to a profitable day.

And what’s nice about playing Betts on Saturday is that, even with a tenuous pitching situation on both sides making it impossible to know who Betts will be facing in any given at-bat, there’s nothing in the splits to suggest he’s vulnerable. He had a 1.037 OPS against right-handed pitching this year and a 1.207 OPS against lefties.

Machado hasn’t had a great series, with just three singles thus far in 15 plate appearances. However, he has come through in the clutch for the Dodgers this postseason, with a pair of home runs in the NLDS and another homer in the NLCS. With the Dodgers needing to peel a game back to level the series at 2-2, expect Machado to step up big on Saturday. Be sure to get him into your lineup.

McClure is also targeting a player with a dream matchup on Saturday. The stars are aligning for him to go for 30, even 40 points, and he comes at a great price. The pick could be the difference between cashing in or going home with nothing. 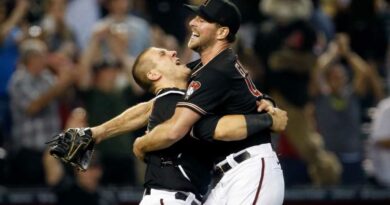 Olney: These teams will be impacted most by MLB’s changing financial landscape

Why World Series-bound Nationals use ‘Baby Shark’ as team anthem