Cubs third baseman and occasional left fielder Kris Bryant is going into his age-27 season. Across parts of four seasons in the majors, he’s put up an OPS+ of 137 with 107 home runs, an MVP award, and 21.6 WAR. He’s not eligible for free agency until after the 2021 season.

If you’re the Cubs, that wouldn’t seem to be the kind of player you trade. Yes, Bryant is coming off a down year by his high standards — .272/.374/.460 in 102 games — and battled serious problems with his left shoulder. Still, he would figure to be a core contributor on a team with the potential to win the World Series.

All that said, here’s a surprising note from ESPN’s Buster Olney:

But it’s possible that the Cubs will trade him, perhaps as soon as this winter. As part of their early off-season discussions, sources say the Cubs have indicated to other teams they are willing to discuss trade proposals for almost all of the players on their roster, including Bryant, who struggled in 2018, batting .272 with 13 homers in 102 games.

Needless to say, a trade involving Bryant would be a shocking turn of events in Chicago. As Olney notes, president of baseball operations Theo Epstein recently said the team has “never operated with untouchables,” which, obviously, means that a Bryant trade is theoretically possible. Of course, it’s worth taking in the entire quote:

“[V]irtually impossible,” would be another key takeaway from Epstein’s comments.

For the sake of argument, though, it’s worth noting that Bryant and the Cubs have never really come close to an extension, and there may be some lingering acrimony dating back to his rookie season, which the club manipulated his service time by not calling him up until they’d secured an extra year of control. As well, the Cubs — despite vast revenues and designs on a championship — may be dealing with budget constraints from ownership. That means they may need to get creative in order to address roster holes. Maybe it takes a trade of Bryant to make that happen.

The smart money would obviously be against Bryant being in anything other than in a Cubs uniform to start the 2019 season, but perhaps the alternative is at least worth pondering. If nothing else, consider the Cubs a definite team to watch this winter. 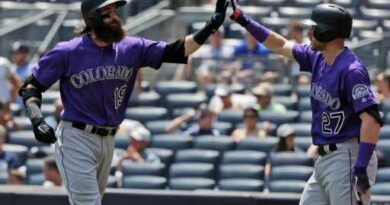 MLB gets serious with protocol measures after COVID-19 outbreaks on Marlins, Cardinals