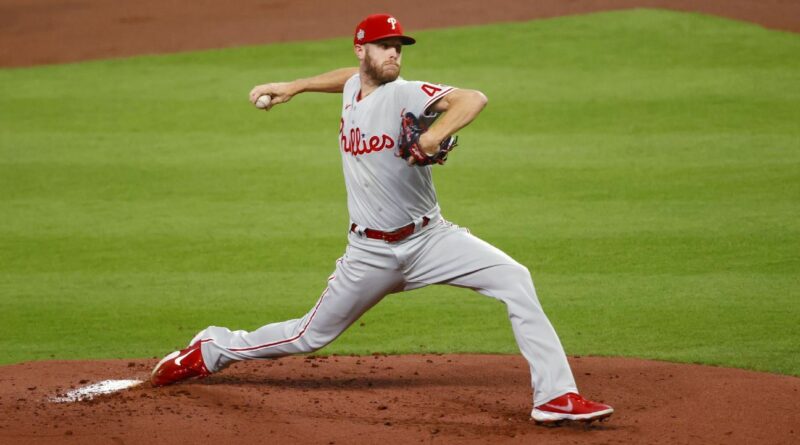 HOUSTON — Philadelphia Phillies pitcher Zack Wheeler was surprised he was pulled in a critical moment in the sixth inning of his team’s World Series-ending 4-1 loss to the Houston Astros on Saturday.

“It caught me off guard a little bit,” Wheeler said after the Astros clinched the title. “It’s win or go home right there. That’s a tough pill to swallow. It’s ultimately Top’s [manager Rob Thomson] call and that’s the call he made.”

The Phillies were leading 1-0 at the time, but Houston put runners on first and third with one out after shortstop Jeremy Pena bounced a single up the middle.

Wheeler was throwing arguably his best game of the postseason and had thrown only 70 pitches. His last two registered at 96 and 97 mph.

But Thomson replaced him with left-handed reliever Jose Alvarado, who promptly gave up a 450-foot home run to Astros left fielder Yordan Alvarez, who bats from the left side. Houston never relinquished the lead.

“I thought Wheels still had really good stuff,” Thomson said, referring to Wheeler and the decision to pull him. “It wasn’t about that. I thought the matchup was better with Alvarado on Alvarez at that time.”

During the regular season, Alvarez was equally dangerous against lefties as he was righties, striking out and hitting into double plays at about the same rate.

Said Wheeler: “It was tough. Obviously, I wanted to be out there and make the pitches. That type of stuff is going to happen. Just probably not the game for it to happen in.

Alvarez’s homer came on a 2-1 fastball, which registered at 98 mph, and was launched to straight away center field, igniting the home crowd and propelling the Astros to the World Series title.

“That pitch?” Alvarado said. “Nothing moving. It didn’t move. If it moved, he had no chance.

The decision to go to Alvarado in the middle innings was one Thomson used throughout the postseason. Despite Wheeler’s surprise, his teammates saw it coming.

“That’s a tough decision because of how good Alvy has been for us,” catcher J.T. Realmuto said of Alvarado. “Wheels was incredible throwing the ball for us tonight. You have two lefties coming up in the next three batters. I’m sure that’s the pocket they had circled before the game.”

Phillies first baseman Rhys Hoskins added: “Thomson has been pretty aggressive with him throughout the whole postseason, and that’s been a winning formula for us.”

Pitching aside, the Philadelphia offense managed just three hits off Astros pitching in Game 6 while the Phillies scored a combined three runs in the final three games of the series — all losses. It included getting no-hit in Game 4.

“They have good pitching,” Hoskins said. “They landed a lot of breaking balls in the zone. They threw a lot of strikes with those early then got a lot of chase late.”

In fact, the Phillies were 0 for their last 31 with 17 strikeouts against breaking pitches and chased more against that type of pitch as the series wore on — 28% in the first three games compared with 36% in the final three. The top five hitters in the Phillies’ offense went 4-for-54 (.071) with 25 strikeouts in those final three.

“We didn’t get it done,” Phillies outfielder Bryce Harper said. “We didn’t finish it.”

Despite the loss, the Phillies vowed to be back in the playoffs next year, citing needed experience from this season as a jumping off point for 2023. In fact, they believe going through struggles to start the year, which led to a managerial change, only made them stronger for the stretch run.

“I don’t know anyone thought we’d be here, given where we were at certain points of the season, except the people in this clubhouse,” Hoskins said. “We expect to be here next year and the year after.”

The Phillies have no major free agents, signed their manager to a two-year extension and now have that playoff experience to fall back on.

Right fielder Nick Castellanos was asked what he learned over the past month, as Philadelphia navigated through the first year of the expanded postseason, participating in and winning the wild-card round and making it all the way to Game 6 of the World Series.

On Saturday, that shot was the Alvarado home run. It sunk the Phillies chances as an underdog in the Fall Classic but didn’t take away from the run they went on to get to that moment.

The disappointment of the night was mixed in with a sense of pride as players high-fived and hugged each other in the clubhouse afterwards, knowing their season was over but satisfied with the effort they gave.

“We’re very proud of what we accomplished throughout the year,” left fielder Kyle Schwarber said. “And how we kept fighting until the end. It was a complete group effort. Really cool.”

Realmuto added: “It was so much fun playing these last 3-4 weeks, playing with these guys. This is probably the closest group of guys I ever played with.”

Nicholas Castellanos shows he believes in Reds’ playoff chances in 2020