There’s something for every team in this year’s market. There are veterans looking for short-term, high-dollar deals, starters around 30 years old looking for lengthy, lucrative deals and plenty of potential bounce-back candidates looking for a chance to reestablish value on one-year deals (maybe with an option or two).

If your favorite team doesn’t add a starter, it’s not because it didn’t have options.

Why he’s here: The Blue Jays traded for free-agent-to-be Ray at the 2020 trade deadline and he liked his time in Toronto, so he bet on himself with a one-year deal to stay with the Jays in 2021. Turns out, that was a brilliant idea. He finally solved the control issues that had long kept him from joining the elite circle of starters; his 2.4 walks per inning in 2021 was light years better than his career average of 4.3 heading into the season. Ray led the AL in ERA, innings, strikeouts and WHIP, just to name a few stats and is a Cy Young finalist (expected to win).

Potential landing spot: The Blue Jays are primed to compete for AL East and World Series titles for years to come, and having a strikeout pitcher such as Ray atop the rotation feels like a pretty good fit.

Why he’s here: Scherzer is 37 going on 29, still an effective and often dominant starting pitcher in the big leagues. The right-hander with three Cy Young wins had a 1.98 ERA in 11 starts with the Dodgers after arriving in a trade with the Nationals. He’ll have lots of teams bidding for his services, offering two or three-year deals with crazy-high annual salaries.

Possible landing spot: Padres. Even though, on paper, San Diego has the five rotation spots filled — Yu Darvish, Blake Snell, Joe Musgrove, Chris Paddack and Mike Clevinger returning from Tommy John surgery — you know after last year’s disaster the Pads are going to be aggressive. And adding Scherzer would be very aggressive.

Why he’s here: The Mets had dozens of issues in 2020, but Stroman was not one of them. He made 33 starts for the club, posting a 3.02 ERA and 3.49 FIP, with only 2.2 walks per nine. Some have criticized Stroman for only throwing 179 innings in those 33 starts, but that total is impacted by a couple of short outings that were not performance-related, such as April 11, when umpires started the game and then pulled Stroman off the mound for a rain delay after he’d faced just two batters. Or June 22, when he left after an inning because of a hip issue. Here’s a more relevant stat: Stroman pitched at least five full innings in 29 of his 33 starts — including every July, August and September outing — and only three pitchers topped that number: Zack Wheeler, Walker Buehler and Julio Urias.

Potential landing spot: Stroman’s more of a contact pitcher (career 7.5 K/9) than many of today’s starters, so pitching in front of a Cardinals team that had five Gold Glove winners makes sense. The Cardinals would like a reliable rotation addition after last year’s cavalcade of rotation injuries and scrap-heap replacements (many of whom did very well, we should add).

Why he’s here: Gausman was outstanding in 2021 for the Giants, posting the best season of his career. He had a 2.81 ERA/3.00 FIP in 33 starts, with a 10.6 K/9 and 2.3 BB/9. Plus, he played last year after accepting San Francisco’s qualifying offer, so he has no draft-pick compensation attached, which is nice for him.

Potential landing spot: The lack of compensation is nice, no doubt, but Gausman had pitched in Baltimore, Atlanta and Cincinnati and never experienced nearly the success he had in San Francisco. The Giants have a lot of money to spend, and a reunion makes all the sense in the world for both sides.

Why he’s here: Just a stellar bounce-back year, a great comeback story for a guy who has basically been an afterthought for a few years. Shoulder concerns might limit teams’ willingness to offer tons of money and lots of years, at least theoretically, but agent Scott Boras has gone on the record that Rodon isn’t signing a one-year deal.

Potential landing spot: The Mariners could use another lefty starter with Yusei Kikuchi opting out of his deal.

Why he’s here: Yeah, this might be a bit high for him, considering how much time he’s missed. But his upside is huge, he’s only 29 and you can bet the two innings he threw at the end of the season helped ease concerns teams might have had about his return from Tommy John surgery. And the track record of players coming back from TJ is pretty solid. Does he take a one-year deal to reestablish value or will some team sign him longer term, maybe a few years guaranteed with lucrative mutual options?

Potential landing spot: Most seem to think Syndergaard will wind up back with the Mets, either accepting the qualifying offer or on another shorter-term deal. But the taste of free agency is a funny thing. I could absolutely see him winding up with a team looking to make a playoff push in 2022. Think Seattle.

Why he’s here: Kershaw, who turns 34 next March, might not be a perennial Cy Young favorite at this point in his career, but he’s still a damn good pitcher when healthy. He had a 2.16 ERA in 10 starts during the pandemic-shortened 2020 season and a 2.93 ERA in five postseason starts (2.31 in two World Series outings). Kershaw’s 3.00 FIP in his 22 starts in 2021 was his lowest since 2016 and his 10.7 K/9 ratio was the third-best mark of his career — better than two of his three Cy Young seasons.

Possible landing spot: Dodgers. Truth is, Kershaw’s probably going to spend time on the IL every year from here on out. He hasn’t made more than 28 starts since the 2015 season, with a wide variety of issues causing him to miss time. For the Dodgers, Kershaw brings value as a franchise ambassador even when he’s hurt, and they have the resources to build back-up rotation options into the roster. It makes sense that they’d keep the fan favorite around and just do everything in their power to make sure he’s healthy for the stretch run and into October.

Why he’s here: It’s hard to know where to rank a pitcher closing in on “40-year-old future Hall of Famer who has only made one start since 2019.” Here’s much more on Verlander’s situation and his potential landing spots.

Potential landing spots: Wouldn’t be at all surprised if he wound up back in Boston, where he has a career 4.16 ERA in 856 2/3 innings.

Why he’s here: Gray has reportedly expressed interesting in staying with Colorado, but the Rockies didn’t extend a qualifying offer, which means Gray doesn’t come with draft-pick compensation and that’s good news for any teams that might be interested in seeing what he can do away from Colorado’s thin air. His career ERA at home (4.54) is actually a tick better than his ERA on the road (4.65), but what happens when he’s not switching between the thin air and “regular” air if he’s in a different home atmosphere? It’s an intriguing question. He’s coming off a solid year, with a 4.22 FIP and 9.5 K/9.

Potential landing spots: Look, we could put the Angels as a “potential landing spot” for every pitcher on this list. But Gray makes a lot of sense in Anaheim. If nothing else, he’s been pretty durable, with at least 20 starts each of the past five full seasons and at least 149 innings in four of those five.

Why he’s here: Yep, another starting pitcher who was key to the Giants’ success in 2021. Makes sense that they’ll bring at least one back; of the three, Wood seems likely to command the smallest deal of the three. He’d fit in Washington with the Nationals.

Why he’s here: The lefty didn’t live up to his billing in Seattle, posting a 4.97 ERA in 70 starts in his three years with the M’s. But he has a durable arm and posted a solid 9.3 K/9 ratio last year, making his first All-Star team in 2021 before struggling in the second half (5.98 ERA). He’ll make sense for teams — not necessarily just contenders — looking to add multiple starters, teams like the Giants, Angels, Cubs, Rangers or Twins

Why he’s here: The former bright hope of the Orioles was great in the shortened 2020 campaign for the Angels, posting a 3.29 ERA in 11 starts, but 2021 was a disaster. Bundy posted a 6.08 ERA and 5.51 FIP, while his K/9 dropped from 9.9 in 2020 to 8.3 in 2021. At this point, he’s probably looking for somewhere to reestablish value with a team that is not counting on him every fifth day to fuel a playoff push. Look for him to land somewhere like Pittsburgh or Texas.

Why he’s here: He belongs in Kansas City. He’s family there. Here’s hoping he goes back home.

Why he’s here: In what was a disaster of a season for Minnesota, Pineda was actually pretty good when he was on the mound, posting a 3.62 ERA in 22 starts, and the Twins (who finished 16 games under .500) were .500 when he started. He’s pretty much a five-inning starter now — he got more than 18 outs only once all year — but he’s good in that role, and finished with a 1.85 ERA in 24 1/3 September innings.

Why he’s here: His All-Star days are likely behind him, but the future Hall of Famer knows how to make the most of his stuff, and he could be an outstanding No. 4 starter for a contender. It’s hard to imagine he’d sign with a team like the Twins or Marlins; maybe the Cardinals — that stellar defense would be appealing — or maybe even a return to the Dodgers?

Why he’s here: Cobb was solid when he was healthy, posting a 3.82 ERA in 15 starts before landing on the IL and missing almost nine weeks with wrist issues. He returned to make three five-inning September starts; two were good, one was not. 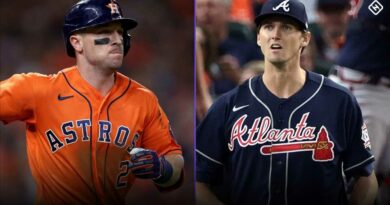