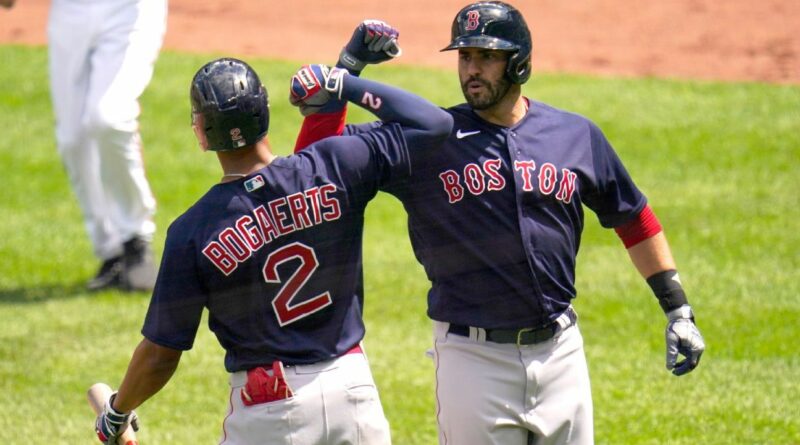 J.D. Martinez suffered through a miserable 2020 season. He hit .213. He ranked 129th out of 142 qualified hitters in weighted on-base average (wOBA). He finished with more strikeouts than hits. It was a shocking season for a hitter who ranked second in the majors in wOBA from 2017 to 2019, behind only Mike Trout.

He also made one thing clear in spring training: “I’m kind of tired of being judged on two months,” he told WEEI.com’s Rob Bradford late in March.

Martinez is making an early statement in 2021. He hit three home runs in Sunday’s 14-9 win for the Boston Red Sox over the Baltimore Orioles and has started the season with extra-base hits in all eight games he has played — including seven doubles and five home runs. Martinez is the hottest hitter on the planet. Oh, and after Red Sox Nation and pundits were ready to bury the Red Sox after an 0-3 start in which the Orioles outscored them 18-5, Boston has won six in a row.

“He’s on a mission to prove people wrong,” manager Alex Cora said after Sunday’s win. “It was only 60 games. He was one month away from getting his numbers right and now he’s locked in and I’m glad he’s swinging the bat the way he is.”

Against the Orioles on Sunday, his three home runs came off three different pitchers:

Granted, that trio of pitchers isn’t exactly headed to the 2021 All-Star Game. I hadn’t even heard of Sceroler and Wells until now, as Sceroler was making just his second major league appearance and Wells his fourth. Still, all three home runs came with two strikes, a good sign considering Martinez hit .171 with two strikes a year ago.

From the cool factoid department, Martinez also became the fifth player to hit three home runs in a game with three different teams:

Martinez’s eight straight games with an extra-base hit to start a season ties the major league record held by Alex Rodriguez (2007) and Sandy Alomar Jr. (1997). It’s the volume of extra-base hits that is so impressive, however, as Martinez is hitting .472/.500/1.083:

OK, the Chris Shelton reference is a reminder that not all hot starts are going to last, but Martinez has that long track record of being one of the best hitters in the game — and now he has his beloved in-game video back to study.

That was offered as one reason for Martinez’s struggles in 2020, when in-game video was disallowed under the guise of pandemic protocols. He also had an ankle issue he played through that might have affected his swing. Whatever the reason, he admitted his troubles were self-inflicted.

Martinez struggled most of spring training, however, leading to concerns that maybe he had just lost his swing overnight. Still, he’s just 33, so it seemed a little early for that to happen. Cora pointed out Martinez finally got going late in camp, especially driving the ball to right field — as he did on Sunday. Cora sent another message to Martinez in spring training, playing him quite a bit in the outfield instead of just using him as the designated hitter. While Martinez has started just one game in the outfield so far, it was perhaps a signal from Cora to remind Martinez to stay in shape.

Still, it’s hard not to ignore the psychological comfort of being able go into the dugout or clubhouse between at-bats to check the iPad. Few hitters in the game study their swing as studiously as Martinez — remember, he completely reconstructed his swing earlier in his career and was in the middle of that process when the Astros released him in spring training of 2014. Martinez signed with Detroit and has since had four 36-homer seasons, five .300 seasons and four 100-RBI seasons. And one big chip on his shoulder.

As for the Red Sox, their six-game win streak includes two extra-inning wins (12 innings over the Rays and 10 innings over the Orioles on Saturday) and they’ve hit a robust .332 with 53 runs those six games. Rafael Devers has homered in three straight games, Xander Bogaerts is hitting .375 and Christian Vazquez is off to a hot start. For this Red Sox lineup to click like it has in past seasons, though, it needs Martinez to thump.

What remains to be seen is how good the pitching will be. Playing six of nine games against the Orioles doesn’t really tell us much. This week’s series against the Twins and White Sox will be a much tougher test. Nick Pivetta, who won Sunday’s game with four runs over six innings, is a key member in the rotation. For now, the Red Sox are in first place — it’s early, of course, but that’s a much better place to be after starting 3-9 and 6-13 in 2019 (and never really recovering) and then 6-18 in 2020.

If Dodgers fall short of World Series, it’s probably time to move on from Dave Roberts