Home » MLB » Red Sox vs. Dodgers: Rich Hill gets the starting nod for World Series Game 4 after all

Los Angeles — Rich Hill will be the Dodgers Game 4 starting pitcher after all, but there was some funny business leading up to the announcement.

The Dodgers had long since planned on veteran lefty Rich Hill being their Game 4 starter. He was the Game 4 starter in the NLCS and was listed as the fourth starter on the World Series roster. He took part in the press conference before Game 3; it’s standard for the starting pitcher from the next day to take those pressers.

Then, the marathon that was Game 3 happened. Eighteen innings. Seven hours and 20 minutes. Both teams emptied their available players and even used some we didn’t think we’d see (Clayton Kershaw as a pinch hitter!).

Then, somewhat surreptitiously, the Dodgers announced via Twitter that the starting pitcher for Game 4 was now “to be determined.”

Next up, roughly four hours to gametime, the Dodgers announced Kershaw as the starter … for Game 5.

And then, finally, with about 3 1/2 hours to first pitch, the Dodgers announced that Hill would, in fact, be the starter.

Maybe the Dodgers were thinking about going with Kershaw on short rest and decided against it. The most likely scenario is they wanted to see how everyone felt after the 18 innings and evaluate the best course of action for the rest of the series. It never hurts to take second, third or even fourth looks at a situation in the most important game of the year.

World Series games will air on Fox, which can be streamed on fuboTV (Try for free). For a look at the complete schedule, click here.

Sources: Double-A 1B gets 6-year deal from M’s 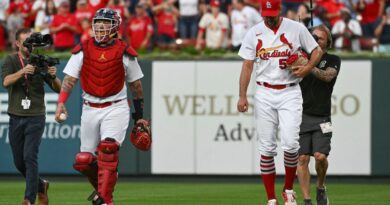