The Boston Red Sox and their fans took to the streets on Halloween Wednesday to celebrate the franchise’s fourth World Series title in the last 15 years. Boston captured the 2018 Fall Classic crown on Sunday night, closing out the Los Angeles Dodgers in five games. The Red Sox were the best team in baseball, winning 108 games in the regular season and going 11-3 in the postseason. They’re also one of the best teams of all time.

The Sox had a relatively quick parade that started at 11 a.m. ET on Boylston Street, next to Fenway Park, and wrapped up around 1 p.m.. Our friends at WBZ in Boston have the latest on the parade.

While this is the Red Sox’s fourth title since 2004, the parade was be the first for many of the team’s stars. Mookie Betts, Chris Sale, David Price and Andrew Benintendi were among first-time World Series winners on the Red Sox’s roster. Manager Alex Cora, who masterfully handled a pressure-packed first season in Boston, was riding in a parade for the second year in a row, as he celebrated the Astros’ 2017 World Series title when he was their bench coach.

Here are some of the best highlights from Boston’s celebration:

Cora takes a shot at the Yankees

Cora started things off with a speech at Fenway Park before his team rode through the streets. He brought up one of the Red Sox’s three postseason losses, recalling how people thought the “sky was falling” after they lost to the Yankees in Game 2 of the ALDS. He followed it up with a line that both Red Sox and Yankees fans will remember for a long time.

“We scored 16 in Yankee Stadium. Suck on it,” Cora told the delighted crowd, referring to the Red Sox’s blowout win in Game 3 of the series.

Price is coming back

The biggest non-parade news of the day came from Price, who told reporters that he will not exercise the opt-out option in his contract. This means the star left-hander who had a remarkable postseason will be back in a Red Sox uniform in 2019 and is set to remain on the team through the rest of his seven-year contract, which runs until 2022.

There were plenty of other highlights (and at least one lowlight, as a woman was pelted by an errant beer, according to the Boston Globe) on Wednesday. We compiled some of the best scenes from Boston in our live blog. Check that out below for a recap from the Red Sox’s parade. 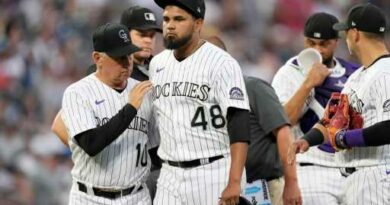 Saunders: Rockies’ season by the numbers is not a pretty picture