The Boston Red Sox had “The Curse of the Bambino.”

The Chicago Cubs had “The Curse of the Billy Goat.”

The Rockies have, what, “The Curse of Dinger?”

Or maybe, when it comes to road games, Murphy’s Law rules: “Anything that can go wrong will go wrong.” You can ask right-hander German Marquez about that.

Of course, the Rockies lost again on Saturday, falling 10-3 to Cincinnati at Great American Ball Park. The Reds, who have won nine of 12, have their dangerous offense cranked up to fifth gear.

After getting 10 hits, including five home runs Friday night while roughing up lefty Kyle Freeland, Cincy had 14 hits Saturday and drove in five runs with two outs.

The Rockies, 1-4 on the current six-game road trip, are a major-league worst 5-26 on the road. They have lost three games in a row, getting outscored 32-12. With a 25-40 overall record, the Rockies are on pace for the first 100-loss season in franchise history.

Marquez had been so good for the last month, posting a 1.89 ERA through his last six starts, with 41 strikeouts vs. 13 walks. But the Reds beat him up, scoring nine runs (eight earned) on 12 hits.

Compounding Marquez’s rough day was his costly throwing error to second base in the sixth inning, getting picked off first base in the fifth after he’d reached on a single, and giving up two singles and a walk to opposing starter Wade Miley.

Miley, using his changeup effectively, pitched seven innings of six-hit ball. He only struck out three, but he induced 10 groundball outs.

The Rockies bumped Miley for three runs in the second to take a brief 3-2 lead, getting RBI singles from Connor Joe and Elias Diaz, and taking advantage of an error by third baseman Eugenio Suarez.

The Rockies will attempt to avoid a three-game sweep on Sunday afternoon at Great American. 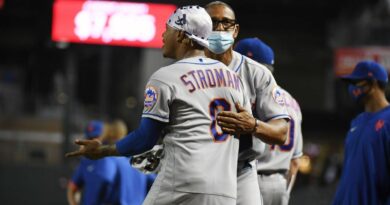