Kyle Freeland met with the media for the first time Wednesday since signing a long-term contract extension with the Rockies.

“Be very excited about the future,” he said.

Freeland’s new five-year, $64.5-million deal will keep him in Colorado through the 2026 season. It continues a storybook baseball journey for the Denver native and Thomas Jefferson High School graduate.

“You can’t script it any better than this,” he said.

Freeland contemplated a future playing elsewhere. But he reconsidered after a recent discussion with his wife, Ashley, on a FaceTime call.

“I was just sitting in my locker and I saw a lot of my teammates in there,” Freeland said. “I was like: ‘You know what? These are the guys that I love going to battle with that I want to continue to go to battle with.’ I love hanging out. I love coming to the ballpark and spending time with them. That goes top to bottom. Not only players but staff and training staff, strength coaches, coaches and the front office.

“When I told my wife that about a week or so ago, she said: ‘You know what? I’m going to stop you right there. That’s your answer.’”

Ashley, in attendance Wednesday at Freeland’s news conference, added: “The grass isn’t always greener on the other side and the crew that is here is a very special group.”

“They figured into it quite a bit. With Mac signing, I truly started to see everything shaping the way that we wanted it to shape,” Freeland said. “The Kris Bryant signing was massive. Senzatela last year. Bringing Cron back on a two-year (deal). Those pieces start falling into place and I was able to start seeing the big picture of everything. It was something that I wanted to buy into.”

Freeland is 23-20 lifetime at Coors Field over 64 games (61 starts) with a 4.59 ERA. He believes the entire Rockies starting rotation has proven up to the challenge of pitching at altitude.

“Myself, (German) Marquez and Senzatela over the years, we have done a good job of creating our own formula of how to get outs efficiently here at Coors Field,” Freeland said. “(Austin) Gomber and Chad (Kuhl) are buying into that as well. They’re showing success.”

The Rockies last reached the postseason in 2018. Freeland, 28, is confident the team’s best days are ahead.

“Look at the group of guys that we have right now,” Freeland said. “A strong core group of us has been together for a long time and are sticking together for the next handful of years. That right there shows that we’re bought into winning, we’re bought into getting to the playoffs, winning in the playoffs, and ultimately winning a World Series with the Colorado Rockies.”

Freeland’s contract extension only solidifies his role as a clubhouse leader for the Rockies.

“Kyle is a huge part of the fabric of this team. Not only every fifth day but the four days that he doesn’t start,” manager Bud Black said. “I saw the growth in leadership once he got his feet on the ground of what it takes to be a major league player. He represents that.” 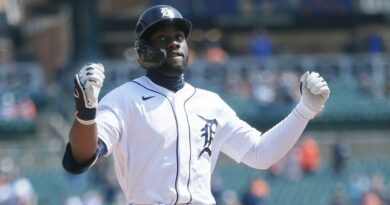