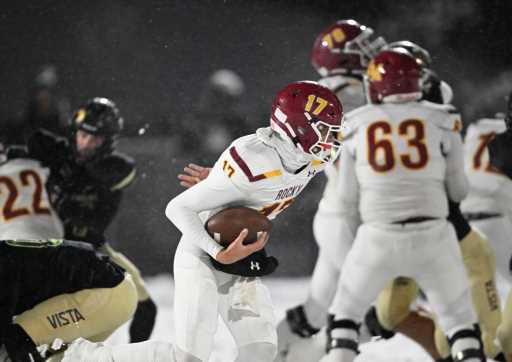 HIGHLANDS RANCH — There was always going to be a CHSAA first-round state playoff game Thursday night, weather be darned.

Playoff football produces iconic moments no matter the weather, but the opening-round matchup in Class 5A between 13th-seeded Mountain Vista and No. 20 Rocky Mountain proved to be a game made for the elements.

“In the 25 years I’ve been doing this, I’ve never had a group that has been through this amount of adversity,” Lobos head coach Mark Brook said. “Our kids have stuck together through it all. … It’s about overcoming adversity and being stubborn kids.”

The adversity? Injuries across the board. The Lobos missed as many as 12 players, many of whom were go-to offensive weapons. Starting quarterback Gage Brook missed several games, members of a punishing offensive line were knocked out, wide receivers, you name it. Even in the regular-season finale the team lost its 1,400-yard rusher, Abraham Chatila, to a shoulder injury.

For the Fort Collins squad that had a deceptive 5-5 record entering Thursday, a snowstorm proved to be the break they needed against Mountain Vista’s high-octane passing attack.

When the ball was kicked off at 6 p.m., a heavy band of snow hampered both team’s offenses. It was a frequent issue in the first quarter. Both teams punted on their first drive, with the blustery conditions also impacting field position.

On Rocky Mountain’s second drive of the game, which started at its own 40-yard line, the Lobos were able to sustain possession via the run, as Arnett converted on 4th-and-short early in the second quarter. Two plays later, Brook found a cutting Cole Honick for an 18-yard touchdown pass. The extra point was missed, but the Lobos took a 6-0 lead with 9:10 to go in the second quarter.

Late in the first half, even in tough conditions, the Lobos opted to punt on a manageable fourth-and-three.

It proved decisive, as the Golden Eagles marched down the field for a 10-play, 90-yard drive. Starting on his own 10-yard line, sophomore quarterback Austin Modrzewski completed only two passes for big gains while everything else came on the ground. With 1:51 to go in the half, he found Jakhai Mack for a 35-yard strike. The extra point was missed and the teams went into halftime tied at 6.

In the second half, Rocky Mountain’s defense came to play, as cornerback Caleb Wolfe intercepted Modrzewski twice, with his second coming in the waning moments of the third quarter.

Not long after, Arnett churned his legs and scored on a 1-yard plunge with 11:55 to go to make it 12-6. And on the ensuing drive, a Rocky Mountain defensive lineman recovered a fumble.

Four plays later, Arnett found a seam up the middle behind his imposing offensive line, which includes senior and BYU commit Ethan Thomason, referred to as the “pancake platoon.” Arnett, who played on junior varsity for a few games this year, found his footing and sprinted 35 yards for the score. A two-point conversion was good to make it 20-6 with 6:18 remaining.

“At the beginning of the season I was swinging (between) JV and varsity and was told ‘you’ve gotta get used to the varsity speed’ and midway through the season I caught up to that,” Arnett said. “… Having built up to that speed helped (tonight).”

Modrzewski responded, moving the ball well for Mountain Vista on an 8-play, 63-yard drive that finished with Sean Conway scoring from close. After a fourth-and-short stop, the Golden Eagles had one last possession, but the Lobos picked off Modrzewski in the end zone on a late heave with 3.5 seconds to go.

“Nine of our guys are sophomores or younger on offense, and while it hurts, we’ll learn from this,” Mountain Vista head coach Garrett Looney said. 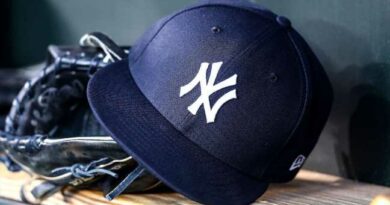 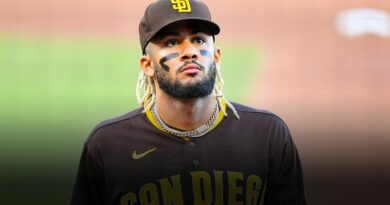 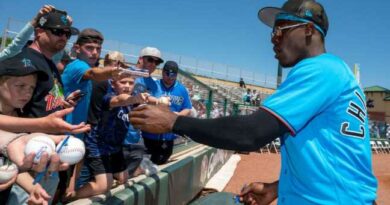