Home » Saunders: For the Rockies’ Justin Lawrence, tears of joy 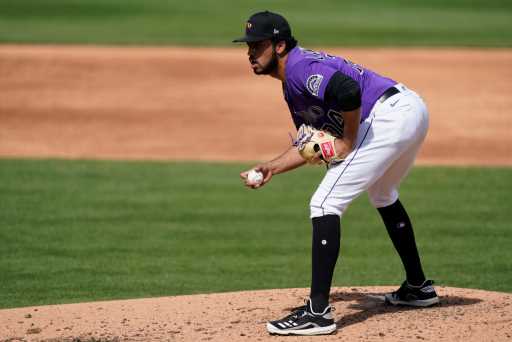 There’s no crying in baseball …

Except when a young man fulfills his lifelong dream and gets called up to The Show.

The side-armed reliever got the word before Thursday night’s game against Arizona at Chase Field. He made his debut that night. His third pitch in the majors was clocked at 101.2 mph. He was a little amped up.

Lawrence, 26, had been on the Rockies’ taxi squad, waiting for his chance. Before the game, third-base coach Stu Cole told Lawrence that he was wanted in manager Bud Black’s office. Sometimes that’s good news. Sometimes it’s bad, as outfielder Sam Hilliard found out Thursday when he was sent down to the minors.

Lawrence had an inkling that good news was coming, but that didn’t lessen the impact of the moment. He walked into Black’s office to find pitching coach Steve Foster and bullpen coach Darryl Scott waiting for him.

“I think the best meeting you can ever have is when you tell a guy that he’s active and he is a major league player, on that day, at that moment,” Black said. “Whoa, that was emotional. He shed some tears. I got choked up with that. And I’m sure Steve and Darryl did, too.”

The Rockies are off to a terrible start and there isn’t much light at the end of the tunnel. But the wonderful thing about baseball is that there is always another day, another game, another story, right around the corner.

When the Rockies departed spring training, Black had the pleasure of telling relievers Ben Bowden and Jordan Sheffield that they had made the club. More tears.

Lawrence’s road to the big leagues was a bumpy one.

He flashed big-league stuff in 2018, posting a 2.65 ERA in 55 appearances with high-A Lancaster. He wowed the Rockies in the Arizona Fall League and impressed again during spring training 2019. But then his control evaporated and his ERA soared at Triple-A Albuquerque and Double-A Hartford.

Then came the bombshell. He was suspended before the 2020 season for taking DHCMT, a substance banned by Major League Baseball. Lawrence said he didn’t know that the NSF-certified supplement he was taking contained DHCMT.

“I wouldn’t wish what I had to go through on my worst enemy,” Lawrence said.

But he picked himself up and can now call himself a big-leaguer. He should soak up every second of it, for as long as it lasts.

As Crash Davis famously said, “I was in the show for 21 days once. Twenty-one greatest days of my life.”

After Lawrence got the news he made three calls — to his wife, Taylor, his parents, and his agent. Then he went out to stretch with his fellow big-league teammates.

Then came one of life’s snapshots, one he’ll never forget. Just before the bottom of the eighth, he came out of the visitor’s bullpen in the right-field corner.

“They opened up the gate and I kind of stood there for a couple of seconds, took a couple of deep breaths,” Lawrence said. “That was the moment, right there. I took it all in.” 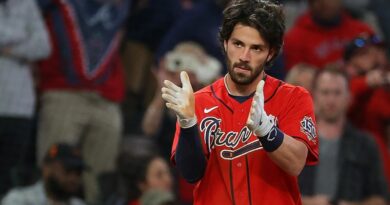 Dansby Swanson burns sage before Braves game, has himself a night