BOSTON — Right-hander Rick Porcello will get the start in Game 3 of the World Series with a chance to help the Boston Red Sox put a hammerlock on the Los Angeles Dodgers.

Manager Alex Cora made the announcement after the Red Sox’s 4-2 win in Game 2 on Wednesday that gave Boston a 2-0 lead in the Fall Classic. Historically, teams that have won the first two games of the World Series have gone on to win the series 84 percent of the time.

Porcello, 29, will be making his first career World Series start. He pitched out of the bullpen for the Detroit Tigers in the 2012 Series, throwing one scoreless inning. This October, he’s 1-0 with a 4.22 ERA over 10⅔ innings. He has started two games and thrown two games in relief in the postseason.

Cora’s other likely Game 3 option, righty Nathan Eovaldi, pitched out of the bullpen in each of the first two games.

Porcello, the 2016 American League Cy Young Award winner, went 17-7 with a 4.28 ERA during the regular season.

With Porcello getting the nod, the Red Sox will see a revamped Dodgers lineup in Game 3. Los Angeles used an all-righty lineup against left-handers Chris Sale and David Price in the first two games. It marked the first two games in World Series history that a team used an all right-handed lineup.

After Game 2, Dodgers manager Dave Roberts said to expect a different look on Friday, when he will send rookie right-hander Walker Buehler to the mound to start.

“Well, Game 3 it’s going to be a different lineup,” Roberts said, just before Cora made his announcement. “I assume we’re going to see Porcello, so it will be different right there.”

Roberts added, “We’re going to shuffle it up for Game 3, but it’s not because of necessarily performance. It’s kind of who the starting pitcher for those guys is.”

While he knows who will be on the mound to begin Game 3, Cora said to be ready for anything.

“That’s the beauty of the playoffs,” Cora said. “It’s actually fun. Because you map out everything over 162 games and you give guys rest, and take care of guys. But now it’s like pedal to the metal.”

Worst performances in baseball at every position 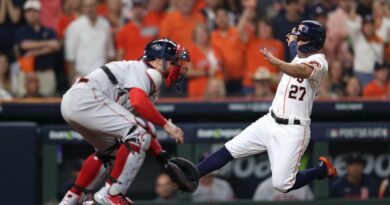