Outgunned, outpitched and outplayed, the Rockies have hit a wall in Philadelphia.

They dropped their third consecutive game to the Phillies on Wednesday night, losing 7-3 at Citizens Bank Park. Colorado, having been outscored 25-8 in the series thus far, hopes to avoid a series sweep on Thursday afternoon.

Rookie right-hander Tyler Feltner, called up from Triple-A Albuquerque for the spot start, pitched five innings and gave the Rockies at least a chance to win the game. But Phillies lefty Ranger Suarez was better, limiting the Rockies to three runs on seven hits over six innings.

The Rockies’ last gap came in the eighth when they loaded the bases but lefty reliever Brad Hand struck out Ryan McMahon — looking — to squash the would-be rally.

On a cold, blustery night, Colorado managed a couple of mini-rallies but never busted out with a big inning.

The Rockies tied the game, 2-2, in the third inning by stringing together hits — something they often failed to do on the road last season. Jose Iglesias (4-for-4) led off with a single, Alan Trejo walked and Connor Joe drove home Iglesias with a sharp single to left. Randal Grichuk scored Trejo with a single, but Grichuk got trapped in no-man’s land between first and second and made a costly out.

C.J. Cron’s two-out, solo homer in the sixth (his seventh of the season) cut Philly’s lead to 4-3, but the Rockies got no closer because the bullpen couldn’t keep the powerful Phillies lineup off the board.

In the bottom of the frame, right-hander Carlos Estevez gave up a single to Didi Gregorius and Garrett Stubbs followed up with an RBI triple to make it 5-3. Philly scored twice in the seventh off Robert Stephenson, utilizing three hits, an intentional walk and a passed ball by catcher Elias Diaz.

Since April 15, Colorado relievers have allowed runs in 12 consecutive games, posting a 7.38 ERA. Colorado’s 4.80 bullpen ERA now ranks last in the majors. That’s quite a fall from grace. Over the first six games of the season, the bullpen had a splendid, though unsustainable, 0.68 ERA.

Feltner’s first inning looked as uncomfortable as a root canal, but he managed to avoid disaster, despite throwing 36 pitches. He gave up a leadoff homer to Odubel Herrera, who ripped Feltner’s 93 mph fastball into the upper deck in right field.

Feltner also gave up a single to Bryce Harper and walked Nick Castellanos but he struck out Kyle Schwarber and Alec Bohm to limit the Phillies to one run.

The Phillies ultimately reached Feltner for four runs on seven hits over five innings, including a leadoff triple by Harper in the two-run third inning. Harper scored on Castellanos’ groundout to second. A single by Bohm, followed by Gregorius’ RBI double off the right-field wall, put Philly ahead, 4-2.

The most encouraging things about Feltner’s start were his seven strikeouts and the fact that he faced the minimum number of batters in the fourth and fifth innings.

Footnotes. Struggling second baseman Brendan Rodgers was a late scratch because of a sore lower back. Rodgers is hitting just .078 (3-for-51) with one RBI and a .172 on-base percentage. … Left fielder Kris Bryant, scratched before Tuesday night’s game because of a tight lower back, did not play again Wednesday. Manager Bud Black, however, told MLB.com that it’s unlikely that Bryant will have to go on the injured list.

Gomber is coming off an excellent start at Detroit where he pitched six scoreless innings in the second game of a doubleheader. He limited the Tigers to four hits, walked none, and struck out eight. Gomber is 10-10 with a 4.49 ERA in 26 starts with the Rockies but 5-8 with a 5.72 ERA on the road.

Wheeler’s numbers this season have not been good but the Phillies were encouraged by his last start. The right-hander’s fastball averaged 97.2 mph over the last two seasons but was down to 94.9 in his first two starts of 2022. But last Saturday, his fastball was up to 95.9 mph. Still, Wheeler gave up four runs on seven hits over five innings as the Phillies lost 5-3 to the Brewers. He struck out five without walking a batter. In three career starts vs. the Rockies, Wheeler is 1-2 with a 7.02 ERA.

Trending: Shortstop Jose Iglesias was 4-for-4 Wednesday night, the second time he’s had a four-hit game this season and the 11th time in his career.

At issue: The old bugaboo that hurt the Rockies on the road last season reared its ugly head again Wednesday night. They were 2-for-10 in the clutch. 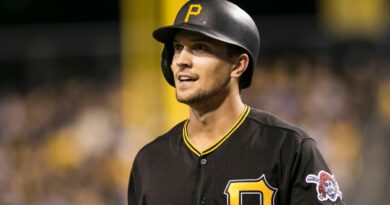