Home » MLB » The Bryce Harper Derby Is Officially Off And Running

Oooh, buddy, you’d better take care and keep your kids well back, because though it’s barely November, the stove is on and it is one hot fucking stove.

Bryce Harper, 26, the face of the Nationals, is a free agent for the first time in his life and he is the most sought-after player on the market. He is going to earn a gob of money over a good deal of years, but from whom? Up until free agency officially started on Oct. 29 Harper could only negotiate with his current team, and the Nationals made their exclusivity count: They reportedly spent much of September negotiating the terms of an offer with Harper’s agent Scott Boras.

The Washington Post reports that the negotiations culminated in a formal offer, made on the day of the last home game of the season. The Post also reports that Harper did not accept it.

What was the offer? Very good question. $30 million a year is the only figure that’s been floated so far. The Post’s source or sources note that the offered deal contained no opt-out, something Harper obviously would prefer, though they also describe it as “an aggressive offer” and “historic.” Though, as we enter the season of the hot stove, Chelsea Janes sagely bids you to beware of everything you hear:

It may very well be a monster offer, but it was never going to be anything other than a stalking-horse bid. Now it’s the turn of other teams—most obviously the Phillies, Cardinals, and Giants—to beat the Nationals’ offer, and it’s almost assured that at least one and likely others will. At which point Boras will circle back to the Nationals, and the other low bids, and see if they want to raise. This is not going to be a short process.

And we haven’t even mentioned the Yankees, who don’t have a real hole in their lineup except at first base. So of course Boras went on the radio yesterday and, completely unbidden, declared that Harper can play first base.

I would be loath to handicap this one, but I also wouldn’t bet on Washington re-signing Harper. The Nationals have been over the luxury tax for two straight years and have stated their desire to get back under it before the truly cumbersome penalties kick in. That might be nearly impossible to do while paying Harper more than $30 million a year. None of the other teams known to be in this race have the same concerns, not to the same extent.

Friends … this stove will get hotter still. 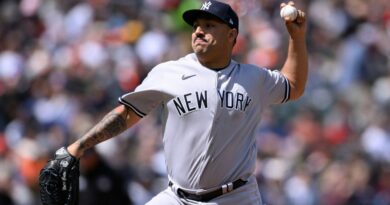