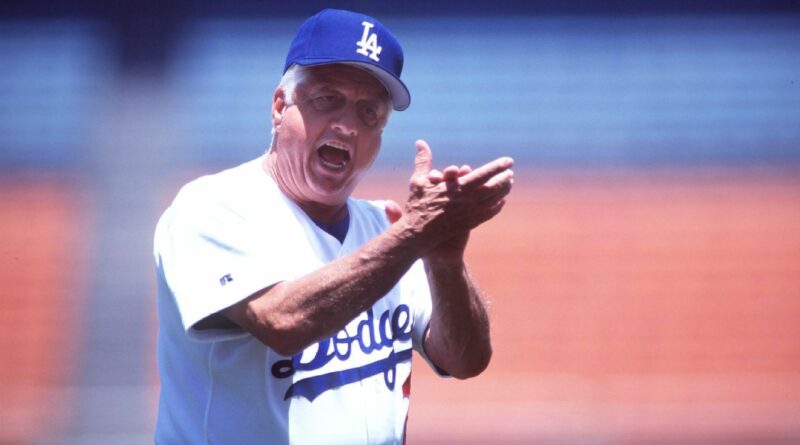 When Walter Alston retired at the end of the 1976 season after 24 years as the manager of the Dodgers, the great Vin Scully interviewed Alston’s replacement. How much pressure, Scully asked, would the new manager be under, following a legend? To which Tommy Lasorda said, “I’m not worried about the guy I am following. I’m worried about the guy that is going to have to follow me.”

It was vintage Lasorda, and as usual, he was right. Lasorda managed the Los Angeles Dodgers from 1977 to 1996 and compiled a winning percentage of .526, won four pennants, won the World Series in 1981 and 1988 and was inducted into the Hall of Fame in 1997. He used to say that he “bleeds Dodger blue,” and he meant it. He spent 67 years in the Dodgers organization as a player, a coach and then the most famous manager in club history.

“The funny thing is, Bill Veeck was going to move his team from St. Louis to Baltimore in 1953 for $5 million, and he was going to take me with him,” Lasorda said. “I was going to pitch for Baltimore, but the Yankees wouldn’t give their approval for the move, so they didn’t move until the next year. The next year, I was with the Dodgers. But if that move had been made the previous year, my whole life would have [been] much, much different.”

Lasorda brought Hollywood to the Dodgers. He loved the celebrity lifestyle; he loved that he became friends with movie stars, singers and other glitterati, greats such as Frank Sinatra. But mostly, he loved baseball and he loved the Dodgers. During spring training 2013 in Glendale, Arizona, Lasorda, then 85, came to the Dodgers’ camp virtually every day to help the organization in any way he could, and to be Tommy Lasorda.

He loved being Tommy Lasorda.

“Most people my age,” he said, “are dead or in a nursing home. I make speeches all over the country. But it’s not work. When you love what you’re doing, it never feels like work.”

Lasorda loved the game, and he loved to manage. And he was very good at it, in part because of the positive reinforcement he consistently gave his players.

“I made guys believe; I made them believe they could win,” he said in the course of a conversation that spring of 2013. “I did it by motivating them. I was asked all the time, ‘You mean baseball players that make $5 million, $8 million, $10 million a year need to be motivated?’ They do. That’s what I did.”

“Cardinal O’Connor, who performed the memorial mass for my mother, asked me once to talk about motivation,” Lasorda continued. “The day I knew I could motivate players was in Spokane in the Pacific Coast League. We were playing in Tucson. We had a little left-hander on the mound named Bobby O’Brien. He had two outs, bases loaded, late in the game. I went to the mound to talk to him. I said, ‘Bobby, I want you to look up at the Big Dodger in the sky. I want you to look at this as maybe the last hitter you will ever face in your life. If you give up a hit, you will die. You will face the Lord knowing that you failed, and you died. But if you get this guy out, you can face the Lord knowing that you got this guy out. So what do you want to do, get this guy out, or die?’ He said, ‘I want to get this guy out!’

“So I left the mound, and he gave up a two-run single. I went back to the mound and said, ‘Bobby, what happened?’ He said, ‘I was so afraid of dying, I couldn’t concentrate on what I was doing.’ That’s when I knew. I actually convinced him that he might die if he didn’t get this guy out. Now that’s motivation!”

Like Bobby O’Brien, Lasorda was a little left-hander during his playing days.

During that time, according to Lasorda, one of his teammates, Don Zimmer, overheard a conversation between Dodgers pitching coach Ted Lyons and Alston in which Lyons told the manager that Lasorda should get in a game.

“But,” Lasorda said 57 years later, “Walter said to Ted, ‘We need him more in the dugout. He adds great life to the dugout.’ I went to Walter and said, ‘What am I, a cheerleader? I want to pitch. Put me in the game. I can do this.’ I never really got the chance. … Ah, but none of that matters now.”

What matters is that Lasorda was a highly successful manager for the team he loved the most.

“Let me show you something,” Lasorda once said, and he took a writer into the office of then-Dodgers manager Don Mattingly. On the wall was a picture of every Dodgers manager in the club’s glorious history. “Look,” he said, “most of these guys only lasted a couple of years. A few went a little longer. It’s amazing to me. Here are all of them, and so few of them managed the Dodgers for very long.”

He didn’t need to complete the thought. Only Alston managed the team longer than Lasorda’s 21-year tenure. And the guy who replaced Lasorda? That was Bill Russell. He lasted three years. Lasorda was right back in 1976. It wasn’t easy having to follow him.

But finally, in 2020, 32 years after the Dodgers last won the World Series, they won again, beating the Rays in six games. Tommy Lasorda, the last manager to win a World Series for the Dodgers, was there, in a private suite at Globe Life Field, surrounded by friends and family. He had been flown in for the clinching Game 6.

“He was cognizant, he knew exactly what was going on when the last out was made,” said Bobby Valentine, a former Dodger, a former manager and a dear friend of Lasorda’s. “So when the final out was made, we all stood up in the suite and yelled, with Tommy, ‘Oh, yeah!’ Because that’s what Tommy always said after a big win, ‘Oh, yeah!’ Then we got a picture taken with him after the Dodgers had won. Of all the records that Tommy holds, he holds the record for most pictures taken with him of anyone in the world. I’d say it’s 500,000. It’s probably much more. Moms who had their son’s picture taken with him in the grocery story. He was always accessible. That was Tommy.”