The 13th inning of Game 3 was none too kind to Nunez, who got tangled up with Dodgers catcher Austin Barnes early in the inning as Barnes chased a pitch from Scott Alexander that had bounced away. Nunez found air, then tumbled to the dirt.

"I don’t know how it happened. (I stuck) my leg over the catcher and (he) threw me down the stairs," Nunez told reporters after the Dodgers' 3-2 win in 18 innings.

Nunez then beat out an infield single, sliding hard into first and Alexander's throwing error allowed Brock Holt to score, giving Boston the lead. Nunez needed several seconds to get his bearings.

He managed to leg it out to third on a Sandy Leon double, but was left stranded.

Then came the defense. In the bottom of the 13th, Nunez tumbled backward into the stands after catching a foul pop-up. When he fell into the crowd, it allowed Max Muncy, on first base, to tag up and advance to second. He would go on to score the tying run.

Nunez stayed in the game and batted again in the 15th, reaching base on an infield single. And in the 16th, he handled a pop-up in the infield but stumbled across the mound and fell to the ground.

So will he be able to go for the Red Sox on Saturday?

"Hopefully, hopefully. A little sore but I should be OK tomorrow," Nunez said.

"We don’t have any more players. So I didn’t have any choice. I kept playing. … I was laughing because everything happened at the wrong time. Unbelievable. But I was like,  I have to go. I have to go."

Nunez, who has battled ankle issues, fought through while in obvious pain.

"Nuney’s rolling around on the field every chance he gets, it seems like, and battling through his leg problems," Red Sox second baseman Ian Kinsler said. "The game being this long obviously makes it extremely difficult."

Just ask Rick Porcello, who got popped in the chin by Nunez's batting helmet upon his return to the dugout.

"He hit me in the tooth with his helmet," Porcello said. "I was telling him, ‘Get up, we’re tired of watching you roll around in the dirt out there.’ I guess I deserved it." 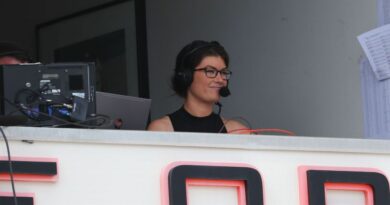 Kris Bryant is an All-Star again, but there’s room for improvement