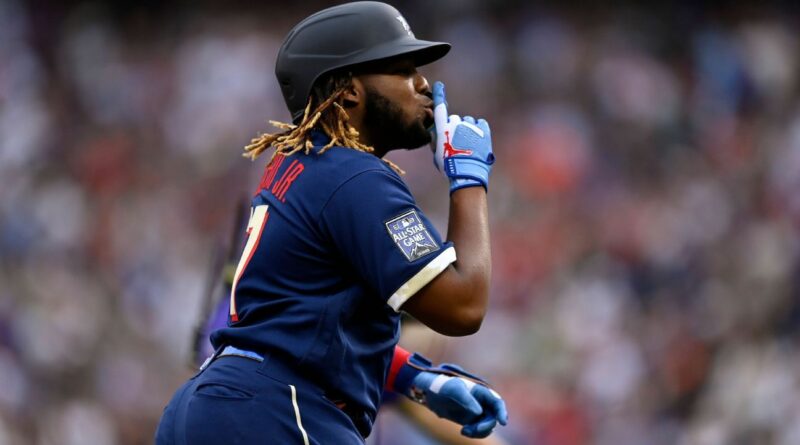 DENVER — The other candidate for American League regular-season Most Valuable Player stole the show in Tuesday’s All-Star Game as 22-year-old Vladimir Guerrero Jr took home MVP honors for the contest after hitting a 468-foot home run and driving in two runs in the AL’s 5-2 win over the National League.

Guerrero and his dad, Vladimir Guerrero Sr., joined Ken Griffey Jr. and Sr. along with Bobby and Barry Bonds as the only father-son combinations to hit a home run in an All-Star game. He’s also the youngest to homer in the game since Johnny Bench, who in 1969. Bench was 21.

“Everyone is talking about how good he is and how good he’s going to be,” AL and Tampa Bay Rays manager Kevin Cash said with a smile. “I’m not that thrilled that he’s going to be that good because he’s in our division. It’s a fun talent, and we’re all going to get to see it for many years.”

Guerrero said he actually made a promise to teammates Lourdes Gurriel and George Springer that he would bring home the MVP award.

“They said, ‘You better win the MVP or don’t come [home],” Guerrero said.

He added: “Dreams come true. Since I was a kid, I’ve been thinking about this moment. I’ve worked all my life very hard, and thank God it’s happening right now.”

Guerrero’s third-inning blast to left field came after the current favorite to win the AL MVP, Shohei Ohtani, grounded out for the second time in the game. Ohtani actually earned the win by pitching a 1-2-3 first inning. He threw a 100 mph pitch, to Nolan Arenado, for the first time since early in the season, eventually getting him to ground out moments later.

“It was by design because I was only going one inning so I didn’t have to think about going further into the game,” Ohtani said through his interpreter. “So I just let it rip.”

Said Arenado: “I think he knew that I was his last batter or could have been his last batter if he got out of the inning, so he tried to hump it up a little bit. But he’s as good as advertised.”

Arenado returned to Coors Field, where he played for the Colorado Rockies for eight seasons before being traded to the St. Louis Cardinals this past offseason. He went 0-for-2 but got several ovations.

“It was an unbelievable experience,” Arenado said. “Running out to the line, seeing all of them (the crowd). I really tried to take it in. Usually I’m pretty locked in on the All-Star Game. You just try to have fun. I really appreciated the moment.”

Meanwhile, Ohtani was asked about his past 24 hours, which included competing in the Home Run Derby, leading off for the AL in the All-Star Game, then pitching the bottom of the first inning. He said he slept until 10:30 Tuesday morning.

“It was definitely a lot more tiring compared to the regular season, but if everyone had fun then I’m good with that,” Ohtani said.

Tampa Bay Rays catcher Mike Zunino also homered for the AL, making him the player with the lowest regular-season batting average (.198) to hit a home run in All-Star history. His opposite-field blast went 433 feet, the longest opposite field home run hit this season.

His counterpart on the NL side, J.T. Realmuto, also went deep. It was just the third time in All-Star history that catchers from both leagues hit home runs and the first time it has happened since 1997.

Los Angeles first baseman Jared Walsh made the play of the game — in left field — making a sliding catch on a Kris Bryant line drive with the bases loaded and two outs in the bottom of the eighth inning. It was his first time playing left field in his career.

The AL has won eight straight All-Star Games, the second-longest streak for either league.

World Series: Dave Roberts ripped for pulling Rich Hill in Game 4, but turns out he had a good reason for it