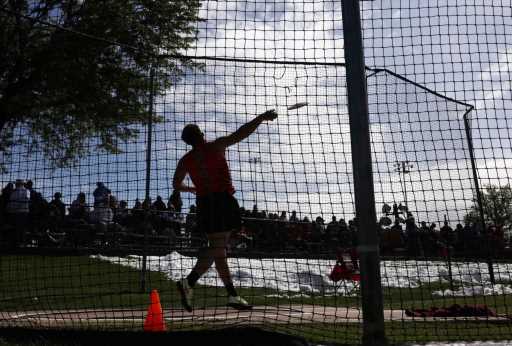 LAKEWOOD — Mohamed Ibrahim has always been one to set lofty goals.

Whether it’s in life, the classroom or in his standout athletic career, Ibrahim, a Wiggins senior, has pushed himself — with the help of others around him — to be his best.

In the final weekend of his high school athletic career, he’s managed to achieve many of those lofty goals, and then some.

“I came in with a mindset that the mission wasn’t done yet,” Ibrahim said. “I was aiming for both state records and both state championships (in the shot put and discus). It was a bit lofty but it’s ‘dream big and fall short.’ That’s what they say, right?”

To accomplish that, Ibrahim had to break two records dating back to 1964 — the second-oldest state marks in Class 2A. Thursday, he took care of the shot put with a toss of 59 feet, 10 inches that eclipsed the old record by half an inch.

Saturday, Ibrahim fell just short in the 2A discus, finishing second to Wray’s Bryan Schoenthal. Sunday, he’ll give a valedictorian speech for his graduating class of 40, then head off to Yale in the fall.

Having an extra push from his younger brother, Laith, and his longtime competitive ally Schoenthal has been a driving force for Mohamed. Laith finished third Saturday, and is an equally accomplished wrestler, having secured his second straight state title at 185 pounds in 2A in February. For Laith, sport has only strengthened family ties.

“I don’t know how to put it into words,” Laith said. “It’s hard to state how hard we pushed each other in the weight room and on the field. The bond between us is really strong. That’ll be hard to see him go all the way to Connecticut. Out of Wiggins, people always talk about how crazy (our success) is, but we worked for it. The cards were dealt, and we worked with it.”

It runs in the family to push one another. The brothers are first-generation student-athletes with their parents immigrating from Palestine. Seeing their parents’ exemplary hard work drove them to aim high.

“They really pushed me to be the person I am today,” Mohamed said. “I think what they taught me was to have trust in yourself, have trust in your religious background and whatever happens, it’s destined for you. To be able to take my process step-by-step in an honest and humble way, being able to approach things that way has been the key for success.”

Along with the Ibrahim brothers, the three throwers have shifted the bright lights to North Central Colorado.

Throw-for-throw, Schoenthal matched Ibrahim in every discipline and Saturday’s finale was a great send-off. He will throw at Chadron State next year.

“We came in trying to break (the state records); it was gonna be either one of us, we had to do it,” Schoenthal said. “I came up a little short, he hit his (in the shot put). … I mean, without Mo being in 2A or him being at every single meet, I don’t think we’d be throwing as far because only one of us would win all the time.”

Whatever is in their future, the trio knows they changed the trajectory of 2A throwing forever. With their communities, families and each other driving them the whole way, they pushed each other to distances they might not have reached otherwise.

“It’s been a true blessing to grow up with the people alongside me,” Mohamed said. “And I think wrapping this senior year up, we have graduation on Sunday and to flip to a new chapter, it’s surreal, but it’s necessary to move on in life.”