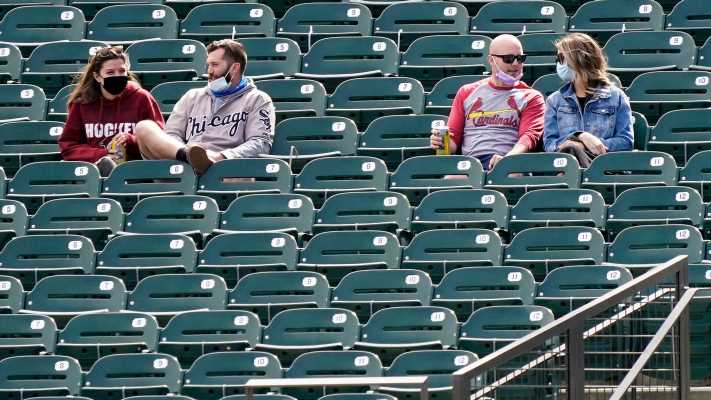 With Opening Day approaching, major league teams are preparing for the return of fans to the ballpark – at limited capacity.

In a memo to teams, he outlined the minimum health and safety requirements for social distancing that include wearing a mask and selling tickets in small groups of pods at least six feet apart, among others.

No fans attended games last season until the National League Championship Series and World Series at Globe Life Park in Arlington, Texas. Fans have been attending spring training games in Arizona and Florida.

While none of the team’s plans are set in stone – and could change by April 1's season openers – most have announced their intentions. Teams are still working with state and local health authorities to set policies and protocols to ensure the health and safety of fans, employees, and players amid the coronavirus pandemic.

The biggest state in flux is California, which is the home to five major league clubs, including the defending World Series champion Los Angeles Dodgers.

California Gov. Gavin Newsom said earlier this week that he is working “very closely” with ML on a plan that would allow fans to attend outdoor stadiums this season.

“We are stabilizing, we’re moving into the red tier,” Newsom said. “When you think forward to April, Opening Day, where we’re likely to be if we all do our job, if we don’t let down our guard … then I have all the confidence in the world that fans will be back, safely, in a lot of those outdoor venues.”

For now, however, here’s an updated, market-by-market look at the likelihood of teams’ ability to have fans at home games this season:

Atlanta Braves: CEO Derek Schiller said the Braves expect to have fans in Truist Park for the start of the season, but will determine the capacity no later than March 12. Schiller sad the club is aiming for 25% capacity.

Arizona Diamondbacks: Attendance likely will be limited to 25% of Chase Field’s 48,633 capacity.

Baltimore Orioles: The O's are in discussion with local and state government on the possibility of fan attendance and expect to make an announcement soon.

Chicago Cubs/White Sox: Chicago Mayor Lori Lightfoot is optimistic fans will return to Wrigley Field and Guaranteed Rate Field. "We’re in discussions with both (Chicago) teams. I think they’ve come up with a very good plan and when we’re ready, we’ll announce what the future will look like for potential spectators in the stands.”

Colorado Rockies: The club announced that they have been approved by the Colorado Department of Public Health and Environment (CDPHE) to host 12,500 fans, the equivalent to 25% of Coors Field’s capacity.

Detroit Tigers: Michigan Gov. Gretchen Whitmer announced that only 1,000 fans will be allowed for Opening Day, less than 3% of Comerica Park's official capacity.

Houston Astros: Anita Sehgal, Astros' senior vice president of marketing and communications, said capacity will be limited to about 25%.

Kansas City Royals: The team is planning to have roughly 30% capacity, which would mean a little more than 11,000 fans.

Miami Marlins: The team announced that the stadium will be limited to about 25% of capacity. That would mean a maximum of about 9,300 spectators in the 37,446-seat ballpark. "We look forward to having the opportunity to have fans come back to our ballpark," CEO Derek Jeter said.

Milwaukee Brewers: The Brewers announced they had reached agreement with the City of Milwaukee Health Department to begin the season at 25% capacity, or between 11,000 and 12,000 fans.

Minnesota Twins: Team president and CEO Dave St. Peter is hoping for a return of a little more than 10,000 fans, just more than 25% capacity of Target Field.

New York Mets/Yankees: New York Gov. Andrew Cuomo announced that the state's stadiums and arenas with at least a 10,000-seat capacity will be permitted to reopen at 10% capacity.

Pittsburgh Pirates: Pennsylvania Gov. Tom Wolf said the state will allow for 20% of maximum capacity at outdoor venues. Pirates president Travis Williams said the club is “thrilled to put those plans into action.”

Philadelphia Phillies: Pennsylvania Gov. Tom Wolf said the state will allow for 20% of maximum capacity at outdoor venues, which is about 8,800 fans at Citizens Bank Park.

St. Louis Cardinals: The Cardinals, in partnership with the office of Mayor Lyda Krewson, have been approved for approximately 14,500 fans, or 32% capacity. "We are excited to have our fans back in the stands for the upcoming season,” said Bill DeWitt III, team president.

Seattle Mariners: The club is still in close communication with state and county health departments about allowing fans at T-Mobile Park. "We are planning at some point this year there will be fans in the stands," said GM Jerry Dipoto. "We don't know what that number will look like or what that date will be. For us in King County we will respond appropriately to the rules that govern us."

Tampa Bay Rays: Seating at Tropicana Field will be limited to around 7,000 per game.

Texas Rangers: The stadium hosted between 10,000-12,000 fans during last year's NLCS and World Series, but Texas Gov. Greg Abbott's announcement that he's phasing out restrictions and mask mandates could open the door to a greater percentage of capacity.

Toronto Blue Jays: The Jays won't start the season in Toronto for the second straight season due to the Canada-U.S. border closure. Their first two homestands will be at TD Ballpark in Dunedin, Florida, where they will allow 15% capacity.

Washington Nationals: The District of Columbia has denied, for now, the club's request to host fans at limited capacity at Nationals Park.

MLB playoffs: Your guide to the final week of magic numbers, berths and MVP drives