Home » MLB » World Series: Dave Roberts ripped for pulling Rich Hill in Game 4, but turns out he had a good reason for it

LOS ANGELES — For six innings and change, it looked like the Dodgers’ Game 4 hero after a marathon win in Game 3 was going to be Rich Hill. The Dodgers lefty went out and was stellar, completely shutting down the Red Sox’s strong offense for six innings. He only gave up one hit, and that didn’t happen until there was one out in the fifth.

Once Dodgers manager Dave Roberts pulled Hill from the game, everything fell apart for the Dodgers. After six scoreless innings, the Dodgers gave up nine runs in the final three.

Now, a starter was humming along and a manager pulled him, which was followed by a bullpen meltdown. I think we know where this goes next. Mass hysteria about how bad of a job the manager did.

The problem with such second-guessing from parties not in the know is they are, um, not in the know. After the game, Roberts said that Hill told him before the seventh inning that he was tiring and to keep an eye on him in the seventh. Roberts further explained that’s the first time Hill has ever said anything like that to him.

As such, once Hill walked the first hitter he faced, Roberts likely wanted to be vigilant instead of getting greedy and leaving Hill in too long. It should be noted, Red Sox manager Alex Cora was bailed out on this front by his offense. He left in Eduardo Rodriguez several hitters too long and gave up four runs as a result.

We can’t have it both ways. We don’t get to say Cora left his guy in too long while Roberts pulled his too early just because we have the benefit of hindsight. Roberts was virtually crucified online and he had the information that Hill told him he was tired — something he’d never done before.

This isn’t like I’m some staunch defender. I’ve already questioned, aggressively, Roberts’ moves in this postseason, but it’s always once I have all the information Roberts had. In this case, many people jumped to conclusion without knowing the facts of the case.

Maybe wait until all the information is available next time? Yes, I know that’s asking too much, but it’s an ask nonetheless.

This Is The Worst Craig Kimbrel Has Ever Been 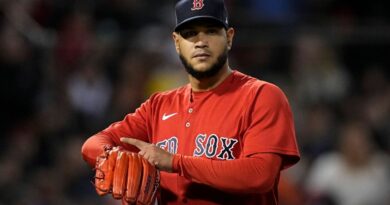