If the Dodgers win Game 3 and come back to win the World Series, Cody Bellinger’s throw in the 10th inning Friday may go down as an iconic moment in franchise history.

With runners on the corners and one out in that 10th inning, Bellinger caught Eduardo Nunez’s moderately deep fly ball and threw Ian Kinsler out at home plate to end the inning and preserve the 1-1 tie.

Look at this throw. Just look at it:

Incredible. Potentially a season-saving moment. If Kinsler scores there and the Red Sox take a 2-1 lead, Boston would’ve had an 82.5 percent chance to win Game 3 and thus take a 3-0 series lead. Instead, after the out at the plate, the Dodgers had a 57.1 chance to win Game 3. Huge win probability swing there.

Bellinger more than atoned for a baserunning blunder in the bottom of the ninth. He was on first base with one out, broke for second too early on a 3-2 count and was picked off. A very bad baserunning mistake, it was. The throw made up for it though. By championship probability added, the throw was the third biggest play of the season (Bellinger was involved the top four):

According to championship probability added, Bellinger throwing out Kinsler was the single biggest defensive play of the season to date. (Win probably added, or WPA, tells you how much a play improved your chances of winning that game. Championship probability added, or CPA, tells you how much a player improved your chances of winning the World Series.)

As for Kinsler, wow what an eventful trip around the bases. He pinch-ran for J.D. Martinez and was nearly picked off first base. (Replay confirmed he was safe.) Then he went first-to-third on a single and overslid the bag, but scampered back before the tag was applied. Then Kinsler was thrown out at home. He seemed determined to make an out on the bases that inning.

Ortiz has third surgery after complications 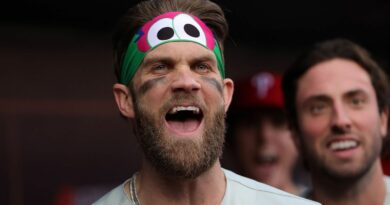