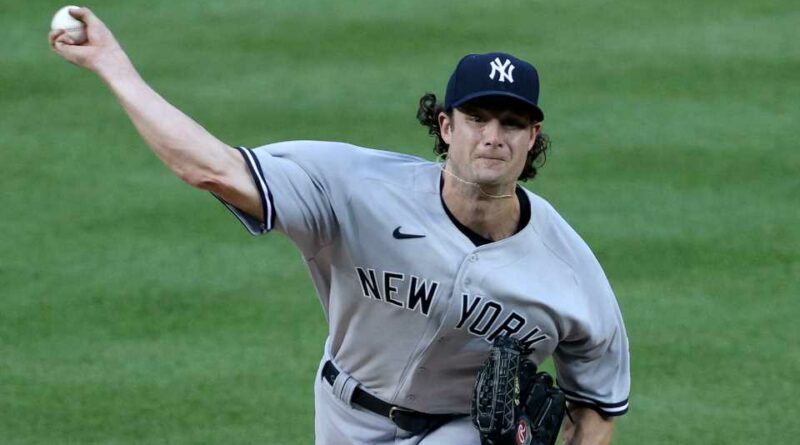 Gerrit Cole didn’t have a good answer to a question from the New York Post’s Ken Davidoff in his Zoom press conference on Tuesday afternoon, mostly because there wasn’t a good answer available for the Yankees’ ace. The veteran columnist point-blank asked him: “Have you ever used Spider Tack while pitching?”

If he said “yes” he’s possibly setting himself up for a suspension, as MLB prepares to crack down on pitchers who use illegal substances to increase spin rates on their pitches. If he said “no” he would almost certainly be lying (there’s no proof of that yet, but lots of evidence and testimony that says he has). And the truth almost always comes out in situations like these.

So Cole gave a long pause, then said, “I don’t quite know how to answer that, to be honest.”

He answered without answering, of course.

Maybe the most surprising thing is how caught off-guard Cole looked when he was asked the question. It’s a bit stunning, actually. The topic has been dominating baseball conversations the past week or so, and even if Cole himself chose to tune out the outside world during the baseball season — possible, sure — someone with the Yankees had to give him a heads-up that this topic would be broached.

“Is it a coincidence that Gerrit Cole’s spin rate numbers went down (Thursday) after four minor-leaguers got suspended for 10 games? Is that possible? I don’t know. Maybe,” he said. “At the same time, with this situation, they’ve let guys do it.”

Zero chance this wasn’t going to be brought up.

Here’s the truth of the situation: Cole almost certainly has used Spider Tack or something similar to improve his grip on the baseball and increase his spin rates, making the ball move more and, therefore, making it harder for batters to make contact. But he’s certainly not the only one. Although we don’t have numbers, it’s absolutely plausible — likely, probably — that more than half of the pitchers in baseball use something MLB would categorize as “illegal.”

Because here’s another truth: Baseball has long turned a blind eye to the “rule-breakers” on the mound. As long as pitchers weren’t too obvious about it, as long as they tried to hide it, the practice would be allowed. The powers-that-be ignored the issue until it could no longer be ignored.

That sounds familiar, right? In baseball’s “steroid era,” no definitive action was taken until the home run record started to fall. And not just the “most players to hit 40 homers in a year” record, but when the fabled 60-home run mark started to be bypassed in early to mid-September, something was finally done to effectively address the issue.

Spin rates have gone through the roof, and batting averages have plummeted to historic levels. Baseball has never been a thrill-a-second sport, but an excess of strikeouts has started to make even the most hard-core fans grow weary. I mean, we’re a week into June and seven starters have sub-2.00 ERAs. And how about this fact: 29 starters are averaging more than 10 strikeouts per nine innings.

Nolan Ryan, the strikeout king of all strikeout kings, only topped 11.0 in two seasons in his epic 27-year career. Yeah. Historic things are happening, and MLB is finally preparing to take action.

This might have been the first time Cole was asked point-blank about using an illegal substance, but it will not be the last. And he won’t be the only one.

Bruce says he’s been dealt by Mariners to Phillies