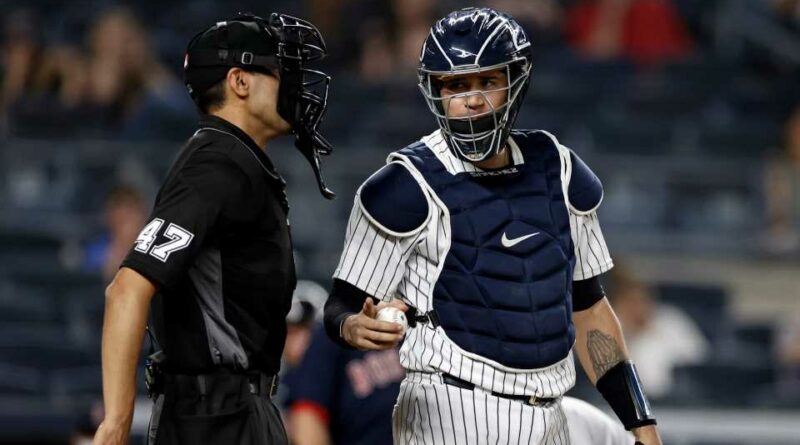 It was Yankees vs. Red Sox and the Umpires on Sunday night.

The Yankees fell to the Red Sox 6-4 in extra innings on Sunday night, with the Red Sox heading to the Bronx and breaking out the brooms in the process, sweeping the Bombers and further extending their second-place lead over New York in the AL East.

As is custom with most Yanks-Sawx series, though, this one came with added controversy: With runners on first and third in the ninth inning, Rougned Odor was called out on strikes on a full count, caught looking at Strike 3 to send the game into bonus frames.

The call was the right one — if umpire Gabe Morales extended the strike zone to include nearby Citi Field.

To make matters worse (or better), ESPN commentator Alex Rodriguez spoke of what a good job Morales had been doing just a few innings earlier, leading to the bizarre and indefensible missed call in the ninth. Christian Vazquez’s frame job didn’t even make the zone, which makes it both more hilarious and sad.

One bad call does not a game make: The Yankees had multiple opportunities to extend their lead or win the game in extra innings, but there’s no denying that a bad miss in a key moment of the game could have changed the outcome.

Understandably, Yankees coaches weren’t happy with the miss: Third base coach Phil Nevin and bench coach Carlos Mendoza were both tossed for arguing with Morales, and catcher Gary Sanchez had a few choice words for the umpire soon after the call.

Once again, baseball fans at large (apart from Red Sox fans) were clamoring for robot umpires and a fix to baseball’s latest, un-greatest issue:

‘I could have walked away:’ Charley Steiner broadcasting Dodger games from his living room during pandemic