Conor McGregor has revealed he would be interested in a bare-knuckle boxing bout.

The former two-weight UFC champion returns to the cage tonight to take on Donald Cerrone at UFC 246 in Las Vegas.

He has also taken on Floyd Mayweather in a boxing ring and has not ruled out a fight without gloves the sport continues to increase in popularity.

McGregor's training partner Artem Lobov dabbled in the sport when he took on Paulie Malignaggi whom McGregor has a rivalry following their sparring sessions in 2017.

And the Irishman said: "It's wild stuff, a couple of my former foes or foes I was supposed to fight have ventured into it so I've been watching it closely.

"It's an exciting game, it's a little bit damaging. No matter what you're either getting cut up or your hands are bust up so it's a very vicious game, although the mixed martial arts game is a wild sport as well.

"It's a very exciting, thrill-seeking sport and I'm very happy I'm involved in it.

"If you're asking if I'm interested in it, most certainly, I'd give it a shot, of course."

Meanwhile, McGregor has revealed he wants to take Cerrone into deep water rather than knock him out early tonight.

"I'm going to go in and acquire rounds here," he added. "I'm not going to be in a rush, I'm going to pressure Donald and I'm going to hurt him – if he can last I'll be happy

"I want to get some rounds in here and build on that; God willing I get out safe and whoever is up next is up next, you're going to see a lot of me." 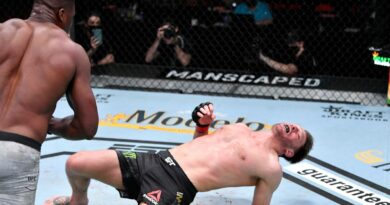 'Of course Khabib is going to win!': Ronaldo backs him to beat Gaethje