Conor McGregor has revealed he has never spoken to Tyson Fury despite the former heavyweight world champion claiming the Irishman was going to train him in mixed martial arts.

Fury claimed he was preparing for a move into the UFC following his win over Otto Wallin and ahead of his debut in WWE.

But McGregor, who returns to the Octagon this weekend against Donald Cerrone, dismissed the prospect.

"I know Tyson's been talking about it a lot and that me and him spoke and I said that I would train him," he told BT Sport.

"I've never spoken to Tyson in my life, but it's not a bad little story so I let it roll.

"Tyson's a good man, I like Tyson. He's a great boxer, a phenomenal boxer, probably the best natural boxer in the heavyweight division at this time.

"I don't think he's just saying he would do it, then not do it like a lot of them do, I say Tyson probably would do it in time. Maybe we could set something up, I'm not going to be holding mitts for him or anything, but if he wanted to be trained by me or even educated by me, I'd need to see him in certain positions or situations.

"I found it funny, he said we'd hugged and all this but I've never spoken to Tyson in my life. He's a mad man, Tyson. It'll be cool that he's going to be there on Saturday."

Fury takes on Deontay Wilder next month in their world title rematch – and McGregor backed him to beat the American.

"He's got a good, tough fight with Deontay Wilder," he added. "He's a powerful guy, but if he keeps his mind strong, keeps his playfulness in there, keeps his sharpness and his elusiveness, he can do the job."

Conor McGregor vs Donald Cerrone is live on BT Sport Box Office on Saturday and will cost £19.95 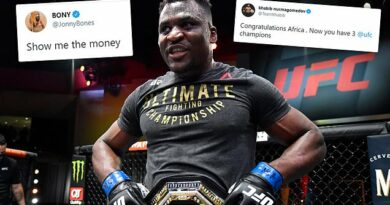 Who is the pound-for-pound best striker in the UFC?