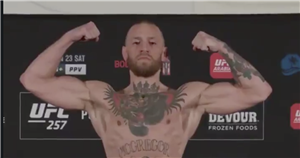 Conor McGregor tipped the scales at 155lb to ensure his rematch with Dustin Poirier goes ahead.

The Irishman was cutting down to the lightweight limit for the first time since his defeat by Khabib Nurmagomedov in 2018.

He did not have to make the championship limit as there will be no belt on the line at UFC 257 on Sunday morning.

But he did just that as he weighed in first on Friday morning before telling the assembled media: "155, that's championship weight."

Poirier then weighed in one pound heavier and the rivals will take part in a ceremonial weigh-in this afternoon in front of a few hundred fans on Fight Island.

McGregor's gruelling training camp took in three countries and two continents as he shed the pounds for this rematch.

Having last fought at welterweight against Donald Cerrone 12 months ago, McGregor flew his team to the Portuguese coast for a 10-week stint last year.

He returned to Ireland for two weeks over Christmas during which he trained at a purpose-built facility in the grounds of his mansion before completing his training camp in Dubai before sailing his yacht over to Abu Dhabi.

And the effort paid off as he looked ripped on the scales before heading off to rehydrate.

McGregor entered the UFC as a featherweight and tore his way through the 145lb division.

But by the time he KO'd Jose Aldo in 13 seconds to win the title in 2015, he looked drawn and rake-thin at the weigh-in.

He jumped up to welterweight to fight Nate Diaz, quipping: "You've seen me on salads, now watch me on steaks."

But his cardio let him down in their first meeting and McGregor was choked out in the second round before avenging his defeat in the rematch.

He now plans a long stretch at 155lb as he bids to become the champion for a second time.

How many games will the Pittsburgh Pirates win in 2020?