Home » MMA » Cyborg-Smith rematch set for Bellator title in May 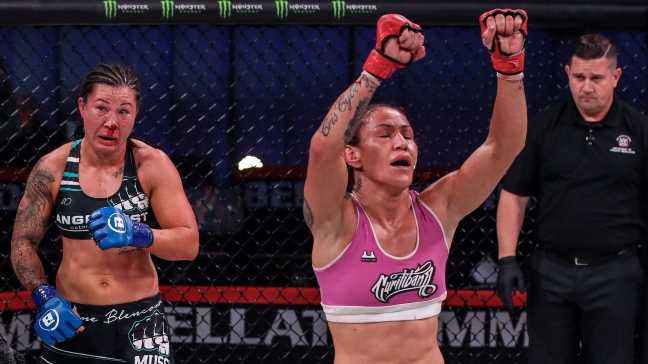 Cris Cyborg will put her Bellator women’s featherweight title on the line against Leslie Smith on May 21, the promotion announced Friday night during the Bellator 255 broadcast.

Cyborg beat Smith in 2016 in what was Cyborg’s UFC debut. Cyborg (23-2, 1 NC) is one of the best female fighters of all time. The Brazilian slugger is coming off a second-round submission win over Arlene Blencowe last October. That was Cyborg’s first title defense.

Cyborg, 35, stopped Julia Budd by fourth-round TKO in January 2020 to win the title. That victory made Cyborg the first fighter to win titles in four major promotions: UFC, Bellator, Strikeforce and Invicta.

Since 2005, Cyborg has been defeated only by UFC double champion Amanda Nunes. Cyborg left the UFC when her contract expired in 2019 after a rocky tenure.

Smith (12-8-1) has won four of her past five fights. The California native is coming off a unanimous decision over Amanda Bell last September.

She is best known for her attempts to organize MMA fighters, who don’t have a union or association.

UFC 249 is Saturday. Here’s what you need to know about Colorado’s fighters. – The Denver Post