In a statement to ESPN, Cormier revealed that he has relinquished the light heavyweight title a little over 24 hours prior to Jones and Gustafsson battling for it. Cormier rationalized — rightfully — that he’d rather give up the title to UFC on his own merit because being “stripped” of a title insinuates that you’ve done something wrong that led to you no longer being recognized as champion of a division.

“Today I am going to relinquish the UFC light heavyweight title,” Cormier said. “I am not going to be stripped of the belt that I’ve defended with my all for three and a half years. Being stripped of a title suggests you’ve done something wrong, and I haven’t.

“I’d rather walk away this way, with my head held high as it always has been, than have the history books say I was stripped. I’ve defended this title this year. I was approached with the idea of fighting at heavyweight, so I took it. I fought three times in 2018. No champion has been more active than me. I am the fighter of the year. My story and my legacy will not include me being stripped of a title. They can have it.”

Cormier has been champion of the light heavyweight division since the title was awarded back to him after a loss to Jones in July 2017 was overturned following another positive drug test for Jones. This past July, Cormier’s future as light heavyweight champ became cloudy after he stunningly knocked out Stipe Miocic in the first round at UFC 226 to add the heavyweight championship to his collection. Cormier has defended the light heavyweight title once since the bout with Jones, a second-round TKO win over Volkan Oezdemir in January at UFC 220. He’s also defended the heavyweight title a single time since he’s claimed it, successfully retaining against Derrick Lewis at UFC 230 via second-round submission.

With retirement seemingly set on the horizon for Cormier once his 40th birthday hits in March, reality is setting in that we’ve truly seen the last of one of quite possibly the greatest light heavyweight fighters of all time. In the end, in typical Cormier fashion, he wanted to dictate everything on his terms. 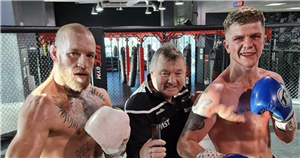