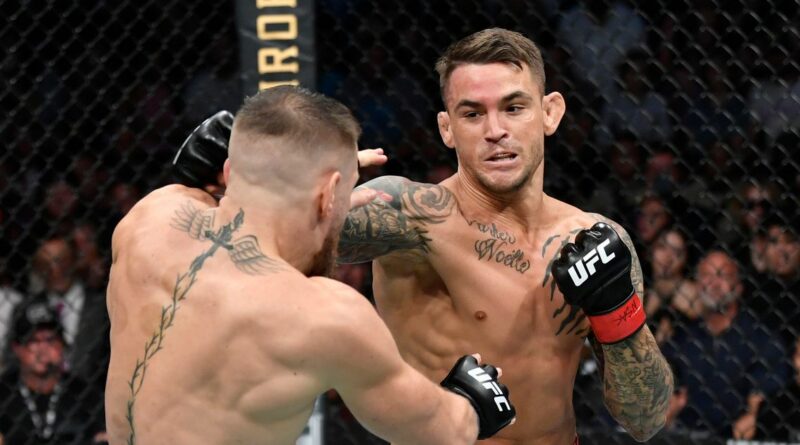 Dustin Poirier has responded to claims that Conor McGregor was previously injured after retiring during their UFC 264 trilogy bout.

The Irishman broke his leg during an explosive opening round between the pair, and has since had surgery to repair the damage after Poirier took the victory in Las Vegas via an early stoppage.

But 'The Diamond' has now responded to these claims that an injury occurred in McGregor's camp before the fight in an interview with Teddy Atlas, and has pointed the similarities in the build-up to the last fight.

“Right off the bat, I feel like mentally it is weak,” Poirier said on The Fight with Teddy Atlas.

“It is excuses but I’m trying not read to far into it, it is a win on my record I did what I needed to do. “I crossed all the boxes in my training camp, gave it my all and went out there, whatever people are gonna say it’s just noise.

“I’m healthy, I’m back home and I am still the number one contender, that is facts.

“There were a lot of excuses in the last one two, he was focused on boxing, he was getting ready to fight Manny Pacquiao, all excuses.”

McGregor released photos after the trilogy bout, in order to prove his injuries that were labelled as 'stress fractures' when updating his fans about the injury after surgery.

He now faces up to a year out of action, after receiving a suspension for the leg break that caused the fight to be stopped early by referee Herb Dean, with Poirier now set to move on and face UFC lightweight champion Charles Oliveira.

The American also delivered his verdict on the Irish star's post fight antics, after he delivered an explosive rant at the end of the fight aimed at Poirier's family.

“The antics were a little surprising, there is no boundaries to this man’s talking and hype.

“I was surprised that he was still sitting there talking with a broken leg.

How will McGregor fair when he returns to the octagon? Comment below

Poirier's coach has also since delivered his reaction to the fight, denying any possibility of another fight between the pair as he believes it would be unnecessary after his fighter has now won two of their three total bouts.

UFC star Anthony Smith has also raised his concerns over the legitimacy of McGregor's reasoning behind the defeat, admitting that every fighter has 'excuses' when the dust settles after a big fight.

McGregor launched a vicious assault on Poirier at the end of the fight, and hinted that the war between the pair may not yet be over.

"Hit me back up I'll chat to you later on, I'll be at the after party at the Wynn night club. You look in bits you little h**!" McGregor jeered at the end of the fight.

Paul Felder also criticised the Irishman for his antics, asking for the Irishman to 'not return to the UFC again' amid links of further fights with Rafael dos Anjos and Islam Makhachev.