When Matt Mitrione’s mouthpiece flew out for the third time during the first round, the ref stepped in to warn the heavyweight that if it happens one more time that he’ll lose a point.

Perhaps overthinking about his mouthpiece made him vulnerable for what came next.

Join DAZN and watch more than 100 fight nights a year

Sergei Kharitonov not only punched Mitrione’s mouthpiece out during the second round, but he finished the fight with a devastating uppercut and hammerfists to have his hand raised in the main event of Bellator 225 at the Webster Bank Arena in Bridgeport, Conn. and live on DAZN on Saturday night.

The second-round TKO not only capped a 100-percent finish rate – seven (T)KOs and seven submissions – at Bellator 225, but it also allowed the Russian to exact revenge on Mitrione, who triggered a no-contest 15 seconds into their initial meeting this past February due to an accidental groin strike.

Mitrione had the quicker hands, tagging Kharitonov at will and looking sharp during the opening round. But the unexpected mouthpiece drama and Kharitonov’s ability to lull Mitrione in, set up the emphatic finish that came in the second round.

Minakov kicked Tim Johnson right in the gut, before driving him back against the cage with a stiff right hand. He then loaded up on another right, which dropped Johnson in a heap, before eviscerating him with a vicious right-left combination.

Lara took Turner’s back and proceeded to pound her out viciously for the first-round finish. Afterward, Bellator president Scott Coker saluted the victorious Lara for using her platform to bring awareness to the raging fires plaguing the Amazon.

There’s a first time for everything and Amosov became the first fighter to submit Rickels, locking in a d’arce choke that the veteran MMA fighter didn’t have an answer for.

Fortune took Schaffroth’s back smoothly and cinched in a rear naked choke just as seamlessly to get the tap-out victory and improve to 7-0. Impressive win for the heavyweight to watch. 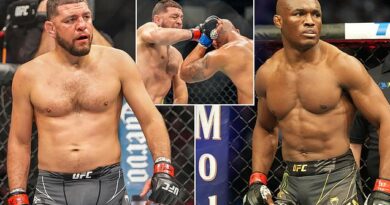