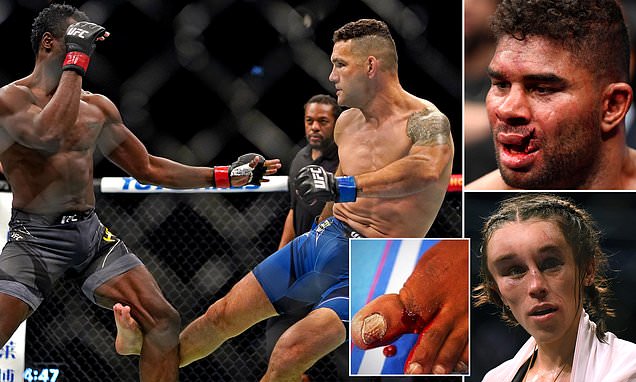 It isn’t often you warn readers away from a story – but anyone with a fragile disposition should click away now.

Chris Weidman’s gruesome double leg break, suffered when throwing a leg kick at Uriah Hall at UFC 261, made the stomach churn and ranks among the worst ever seen.

From Alistair Overeem’s gruesome lip tear to Joanna Jedrzejczyk’s extra-terrestrial-like swelling, here’s a look at some of the worst injures sustained by fighters over the years. 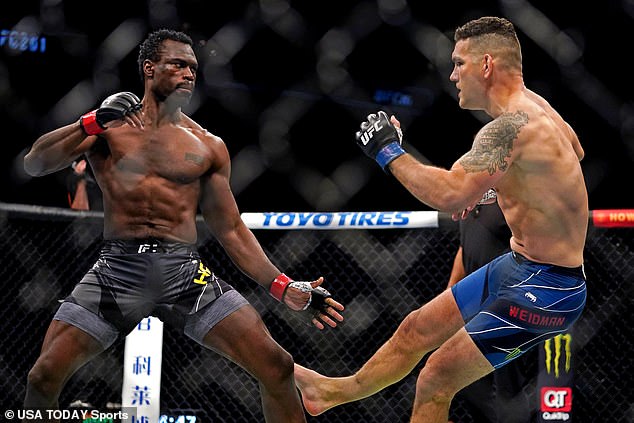 Weidman had a new lease of life, moved his family down to South Carolina and was ready to launch into a final title tilt of his career.

But just 17 seconds into his UFC 261 clash with Uriah Hall, disaster struck.

He landed a low kick and broke his leg in two places. The replay was only shown twice on the broadcast, so grotesque was the footage of his lower leg flapping around.

It was clean break of both his Fibula and Tibia bones and Weidman showed the extent of the damage when he shared a pre-surgery X-Ray. 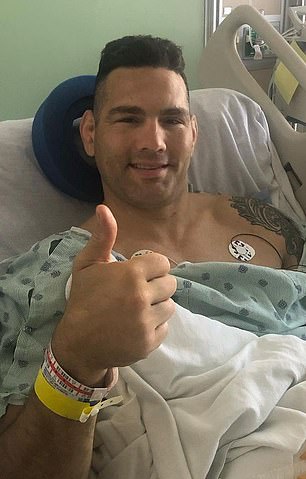 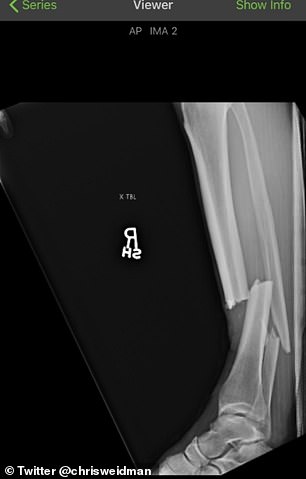 The shoe was on the other foot for Weidman back at UFC 168. This time it was his opponent breaking a leg having had their kick blocked.

Silva was heard howling in pain and had to be taken from the cage on a stretcher after the sickening blow.

It was the other leg, but the same bones snapped for the UFC great and he took 13 months to fully recover.

Those fans inside the arena and back home watching the broadcast will never forget the image of Silva’s limp lower leg drooping from his shin at a strange angle. 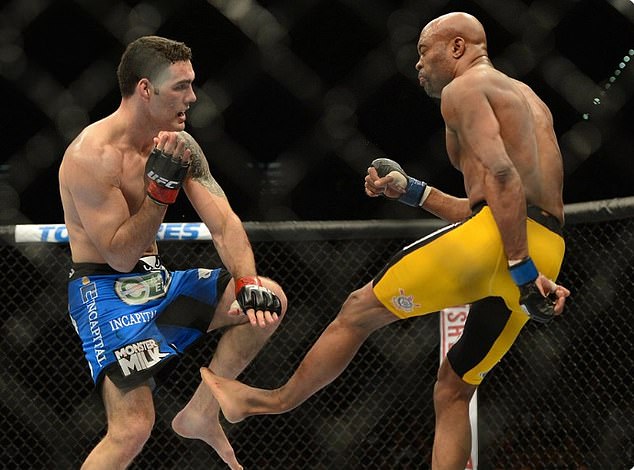 As he was being carried from the arena, he asked his coach: ‘Why did this happen to me? Why didn’t God protect me?’

Fortunately, there was no damage to blood vessels or soft tissue and the breaks were clean.

He later reflected on his fear in the aftermath of the injury, saying: ‘I was afraid. I don’t look at my leg. I don’t see my leg. I just take the medicine and just sleep for two days.’

Eye pokes are a regular occurrence inside the octagon but rarely are they so severe that the fight is called.

Back in March, Muhammad jumped at the chance to take on British star Leon Edwards in what was the biggest contest of his career.

But it ended in disaster for both men, with Edwards accidentally poking Muhammad in the eye and the doctors ruling that the underdog could not continue.

Replays and images of the incident showed just how nasty it was.

The American’s eye began to leak blood and he also required stitches. Edwards has since confirmed a fight with Nate Diaz while Muhammad has had to lick his wounds and await another opportunity. 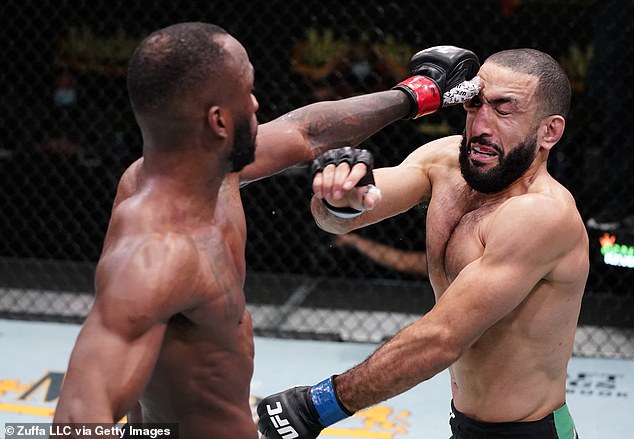 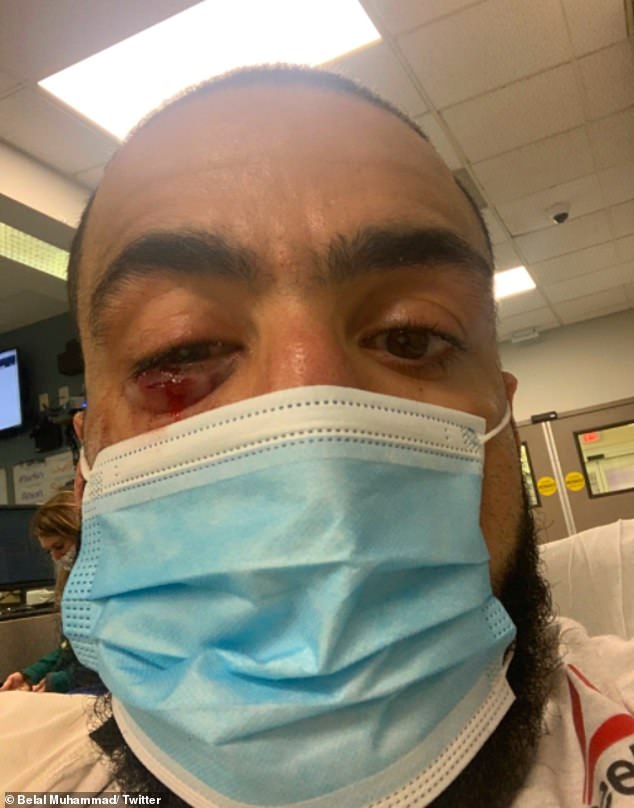 There was something particularly horrendous about this one.

Frank Mir slowly wrenched the Brazilian’s arm when securing the kimura in the first round of their UFC 140 fight and everyone watching knew was was coming.

For some reason, Nogueira refused to tap out and the inevitable happened, his arm snapped.

His surgeon later said: ‘The fracture began in the middle of the bone and extended to the elbow region. Unfortunately, the radial nerve [one of the main nerves lending a feeling of power to the hands] was damaged.

‘The nerve is located in the area of the fracture, and the bone compressed it. Before the operation, he had very little strength in his hand and no strength whatsoever in his thumb.

‘The operation involved an incision behind the arm. The nerve was removed from the location of the fracture and treated. The fracture was fixed with a plate and 16 screws.’ 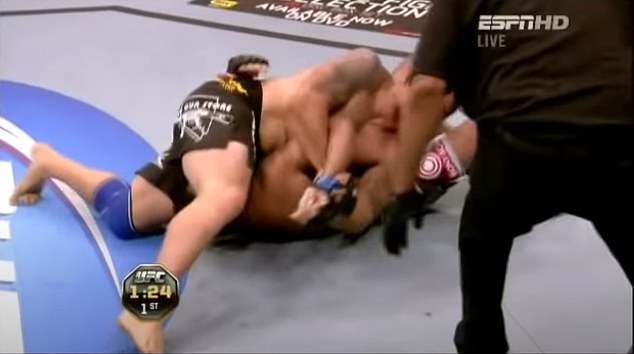 The fight was out of this world and so was Jedrzejczyk’s head. The Polish strawweight suffered extra-terrestrial-like swelling of her head.

She went five brutal rounds with Zhang Weili and endured a massive hematoma in the early stages of the title showdown.

The injury itself stemmed from an accidental head-butt but she ploughed on regardless to play her part in a fight for the ages, losing on the scorecards.

It was hardly surprising that Jedrzejczyk looked unrecognisable given the sheer output of both women.

In total, 783 combined strikes were thrown from both competitors. The swelling took five days to go down and the defeated fighter underwent minor surgery from a plastic surgeon on her ear. 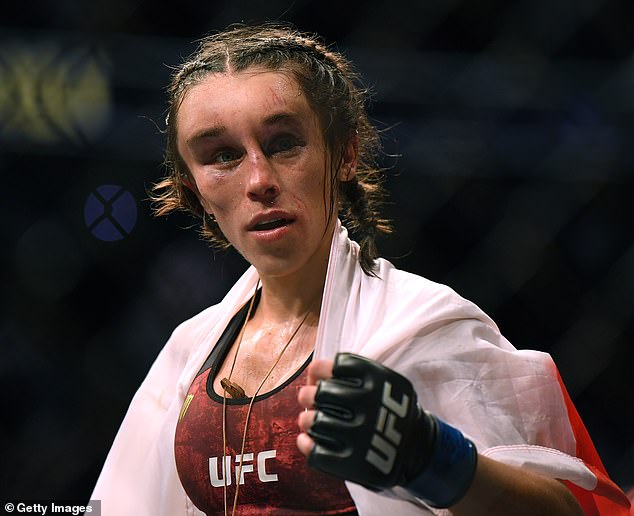 Fractured orbital bones are not uncommon in the UFC but the outward appearance of Mitrione’s was alarming.

He took a heavy shot from Travis Browne in their 2016 encounter and a golf ball-shaped lump emerged.

Earlier in the contest, Mitrione had been poked in the eye on more than one occasion and had trouble seeing out of it.

To make matters worse, the eye wasn’t his only problem. The heavyweight also sustained a dislocated shoulder when slammed into the mat by his opponent. A tough night at the office. 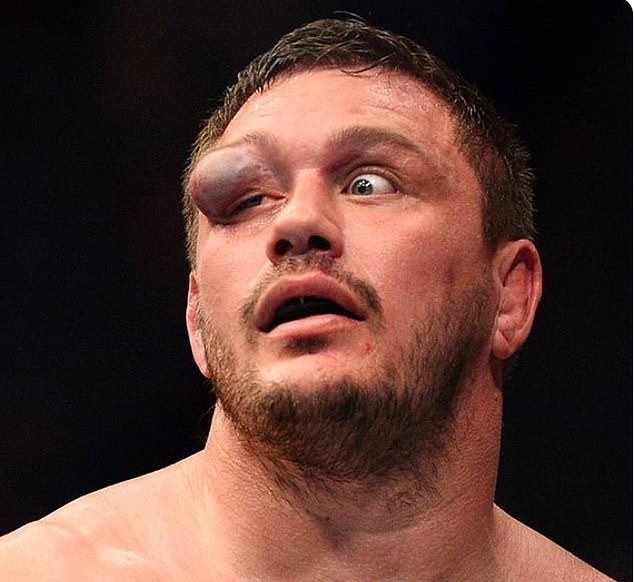 ‘Split lip’ doesn’t quite do it justice. The veteran heavyweight suffered a KO defeat by Jairzinho Rozenstruik in the last four seconds of their 2019 fight.

As if the last-gasp defeat wasn’t bad enough, the killer blow completely ripped his skin open.

The lip was torn through entirely in a gash creeping upwards towards Overeem’s nose.

Fortunately, the UFC have some of the best plastic surgeons in the business working at their behest and the recovery was remarkable.

A thin scar can still be seen when looking closely but the wound healed miraculously. After the fight he tweeted: ‘Getting stitched up. Lip not too sexy at the moment.. a little bit a fast stoppage if u ask me – but hope u guys enjoyed the fight.’ 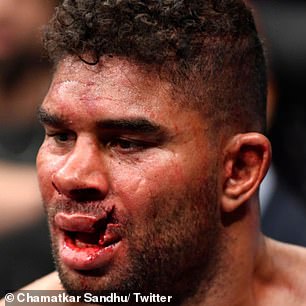 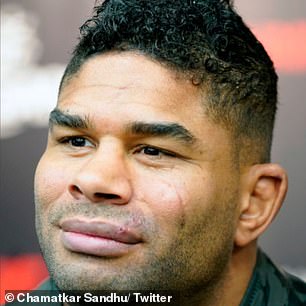 Yes, you read that correctly. In a 2014 fight against Jessica Eye, Smith took a punch to her cauliflower ear and it duly exploded.

It almost looked as though the ear tore in half and the referee put a stop to it shortly afterwards.

Smith was so angry that the contest was halted that she said the pain did not register.

‘I really didn’t feel anything. I don’t remember it hurting at all until after the fight,’ she later told ESPN.

‘When I watched the replay, I saw the ringside person pushing gauze all the way into my ear, and I remember that in that moment, it did hurt. Otherwise, I was so mad that they stopped the fight that I didn’t feel anything.’ 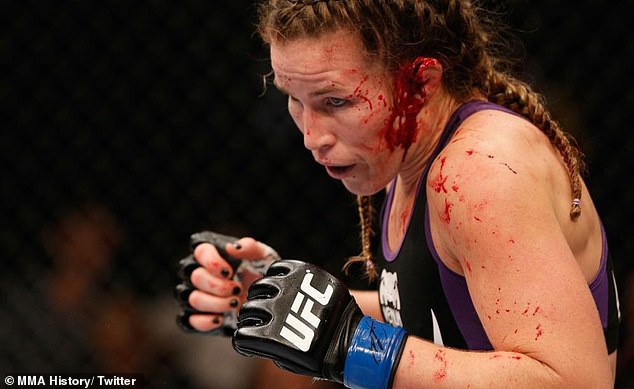 This grizzly injury came for Jones when he was stuffing a takedown from Chael Sonnen in 2013.

He rolled over on the toe and dislocated it, ripping it away from the skin. Fortunately for ‘Bones’ he finished his opponent later in the first round. 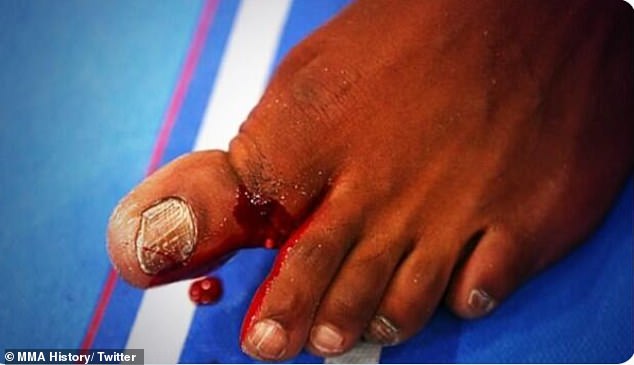 Afterwards, the extent of the damage became clear and he gave an interview with Joe Rogan from a stool while medical staff worked on him.

Jones was ultimately more concerned about the injury ruining his holiday plans than the pain it was causing.

He said: ‘I was supposed to go to Jamaica after this. That’s not gonna happen.’

Dwayne ‘The Rock’ Johnson teases special announcement ahead of UFC 244