Home » MMA » UFC 276 takeaways: Volkanovski in a league of his own, Adesanya and Pereira storyline plays out perfectly 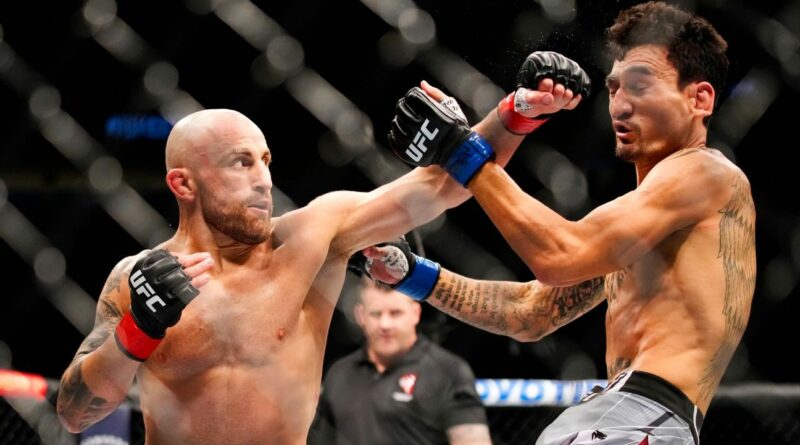 For the last year or so, to me, the debate between the best pound-for-pound fighter in the world has been between Kamaru Usman, Israel Adesanya and Volkanovski. And of course, it’s close, right? Whatever order you have those three in, it’s defensible. There had been no wrong answer to the question: Who is the best fighter on the planet?

That is no longer the case. Volkanovski is the only answer now after a dominating performance at UFC 276.

Look, I love Usman. I love the fight IQ, the cardio and the physical wrestling style when he needs it. In addition to the work he’s done with Trevor Wittman to refine his striking. Usman is a wonderful fighter. As is Adesanya. But, Volkanovski made Max Holloway look average in this co-main event. This version of Volkanovski would dominate the old version — and that version was the one who won a championship! I just don’t think anyone in the sport is quite at his level at the moment.

And the numbers back it up.

If I had to bet on one fighter right now to get me a win in any weight class, after UFC 276, it’s Volkanovski. — Brett Okamoto

Discussing each other’s careers in an interview with ESPN in Sydney, Australia, the duo made a case for why the other was unbeatable in their division.

At UFC 276, both fighters proved their teammate right.

While Adesanya said Holloway nearly edged Volkanovski in his second fight, the Nigerian said his City Kickboxing teammate and good friend “had downloaded enough information” through 10 rounds that he would not be put under any stress by the American in their trilogy.

You only had to look at the damage on Holloway’s face and the little punishment Volkanovski had suffered coming the other way to know that Adesanya had been spot on with his pre-fight analysis.

Volkanovski spoke of Adesanya’s defense and how even if you penetrate his outer reaches, capitalizing on it presented an entirely new challenge.

Just like Adesanya, Volkanovski nailed his analysis of the middleweight champion as Jared Cannonier was able to get through to create an opportunity to land on Adesanya, but then found minimal success from there.

Two great champions who belong in the top three pound-for-pound rankings, both believing the other has double-champ status in their destiny. Volkanovski at lightweight, Adesanya at light heavyweight. Given what they demonstrated in Las Vegas, only a brave man would suggest that challenge is impossible. — Sam Bruce

Pereira is ready for all challenges

Alex Pereira has fought just three times in the UFC. He has only seven fights as a pro in mixed martial arts. Most fighters of his MMA experience level are toiling on the regional scene or jockeying to earn a berth on Dana White’s Contender Series. Pereira? He might have just secured a UFC title shot.

Pereira shocked Sean Strickland via first-round knockout on Saturday night. Coming in, ESPN ranked Strickland as the No. 7 middleweight MMA fighter in the world. But those that were shocked by this result never watched Pereira in kickboxing. The Brazilian striker, who trains under former UFC light heavyweight champion Glover Teixeira, was one of the best kickboxers in the world for several years, a former two-division Glory champion. Plus, he owns two kickboxing victories over current UFC middleweight champion Israel Adesanya, including one via knockout.

The storyline was already set for Pereira to climb the UFC rankings and fight Adesanya again in a rivalry matchup that crosses over between two different combat sports. But very few thought Pereira would surge up the ladder this quickly. He beat Andreas Michailidis and Bruno Silva in his first two UFC bouts. Of course, both are solid fighters; Strickland was a different challenge, a high-level middleweight who had won six straight against tough competition.

And Pereira flat-out starched him. He made it look easy. In his postfight interview, Pereira asked the crowd here to cheer for Adesanya in the night’s main event. For good reason. Pereira knows the story writes itself. He just put himself in a position for a highly intriguing middleweight title fight — one he could actually win, less than ten fights into his pro MMA career. — Marc Raimondi

On Jalin Turner: Turner’s length is problematic for anybody, not just at lightweight, but also if he ever returns to welterweight. His performance at UFC 276 was about as perfect as it could be against a ranked fighter like Brad Riddell, who will likely go on to have big fights in the sport. I loved how he hurt Riddell early, knew that he had him in trouble and clearly knew what to do next. He used his technique to lock in Riddell and squeeze him into a guillotine to make him tap.

It was an impressive performance. It’s tough for a coach in this scenario because he might still have work to do, but he didn’t show it tonight. His ceiling is scary high. A title contender? A champion? A champ-champ? It’s all a possibility.

On Ian Garry: Saturday night was a reminder of why many are excited about Garry. Against a game Gabe Green, Garry gave fight fans arguably his best performance in the Octagon. He showed excellent distance management, shot selection and poise as he popped jabs and straights from range for 15 minutes. His defense, while not great, looked improved from his previous fights as Green was able to touch him up, forcing Garry to scramble and reset. He still needs to work on his grappling and fence work, as higher-ranked fighters will pose a bigger threat in bringing him to the ground and cutting off the Octagon. This is the benefit of being young, as Garry’s got all the tools to be great, and I believe he will crack the top 10. It will take a little time, but the experience he’s getting now is valuable.