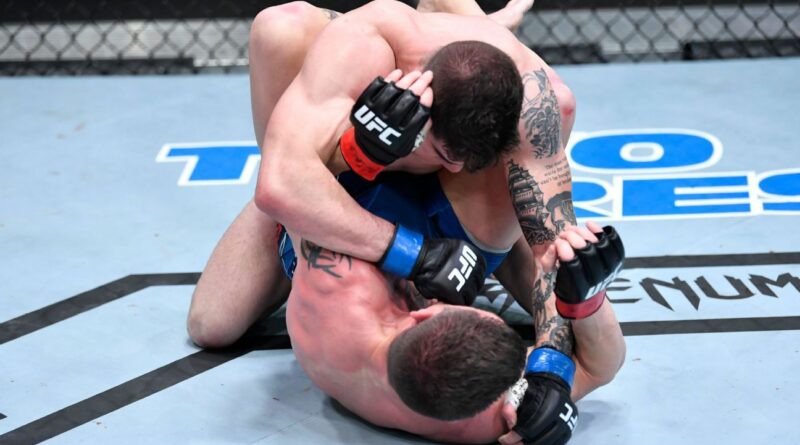 UFC middleweight Kevin Holland agrees — he blew it three weeks ago in Las Vegas. It was his first appearance in a UFC main event, and he lost nearly every round to Derek Brunson.

Holland (21-6) believes he blew it because, in his mind, he’s a much better martial artist than Brunson. Others thought he blew it because even as he lost, he continued to talk trash, which simply wasn’t a good look. UFC president Dana White definitely thought Holland blew it, and he had no problem saying as much in public interviews.

Well, the 28-year-old Holland didn’t have to wait long for a chance to put all of that behind him, as he’ll face Marvin Vettori (16-3-1) in Saturday’s UFC Fight Night main event at the Apex. Holland agreed to step in on short notice for Darren Till, who withdrew last week with a broken collarbone.

If Holland is to redeem himself, it won’t be easy against Vettori, who has won four in a row, including a five-round decision over Jack Hermansson in December. The 27-year-old’s last loss was to the current champ, Israel Adesanya, by split decision back in 2018.

In addition to the main event, UFC strawweight Nina Nunes returns for the first time since giving birth to her daughter and will face Mackenzie Dern, who is also a mother. And a pair of very promising featherweight prospects in Sodiq Yusuff and Arnold Allen will square off in the co-main event.

Brett Okamoto and Marc Raimondi recap the action as it happens, or you can watch the fights here.

Solecki, who was born in Wenonah, New Jersey, bested Miller, of Whippany in the same state, in a three-round unanimous decision. All three judges saw it for Solecki, via scores of 30-27, 29-28 and 29-28.

The 27-year-old showed a lot of respect towards Miller, who set a UFC record for most appearances in the Octagon with 37. It was Solecki’s night, however, as he easily out-grappled Miller in the second and third rounds. The two lightweights exchanged punches early in the first round, until Miller scored a takedown and ended the frame on top. Solecki committed hard to a grappling strategy in the final two frames to leave no doubt on the scorecards.

A Contender Series alum, Solecki is now 3-0 in the UFC, with wins over Miller, Austin Hubbard and Matt Wiman. Miller continues to stay active at age 37, fighting three times in 2020. He is 1-3 in his past four.

European fans have long touted the ability of Gamrot, the former KSW lightweight and featherweight champion. Now, he has shown it on the biggest stage.

Gamrot stopped Holtzman via TKO at 1:22 of the second round in a breakout performance. Gamrot dropped Holtzman hard with a beautiful, one-two combination and then finished with hard punches on the ground. It was the first KO/TKO of his career.

“I’m coming to the top,” Gamrot said in his postfight interview. “Let’s go!”

The finish was really set up by Gamrot’s wrestling. He took down Holtzman several times in the first and second rounds. With Holtzman thinking about the takedown, Gamrot absolutely rocked him with the big right hand that led to the finish. Gamrot is now training at American Top Team in Florida under coach Mike Brown and appears to be someone to watch in the 155-pound division.

Gamrot, 30, lost his UFC debut by split decision to Guram Kutateladze last October. Prior to that, the Poland native was a perfect 17-0. Holtzman, a 37-year-old Tennessee native fighting out of Arizona’s MMA Lab, has dropped two straight.

Bahamondes went into his UFC debut with a good amount of hype, but Makdessi played the role of spoiler to a tee.

Makdessi, of Nova Scotia, looked a little uncomfortable early, having to deal with the 23-year-old prospect’s impressive height and reach. He eventually settled in beautifully though, and nearly finished Bahamondes on multiple occasions. The lightweight fight ultimately went the distance. Two judges scored it for Makdessi 30-27 and 29-28. A third saw it for Bahamondes, 29-28.

Born in Santiago, Chile, Bahamondes came out on fire in his promotional debut, switching stances and using his 7.5-inch reach advantage to land from a distance. Makdessi turned the tide in a big way midway through the round, however, when he hurt Bahamondes with a left hand to the temple and then knocked him against the fence with a short right uppercut.

Makdessi never really lost control from that moment on. The entire fight played out on the feet, and the veteran kept the young prospect out of rhythm with his jab and short combinations. Bahamondes did rally late, as he finally pushed Makdessi backwards and placed him back on the end of his punches, but it was too little, too late. Bahamondes’ face was badly bloodied and swollen by the end of the fight.

Bahamondes, who has fought at welterweight previously, missed weight for the bout by less than one pound. Still, he showcased why so many feel his ceiling could be high in the UFC. Makdessi, who has fought in the UFC since 2010, moves to 4-1 in his past five contests.

Danho had not fought in nearly five years, but there was absolutely no ring rust to be observed.

Danho crushed De Castro with a huge overhand right that put him out on impact in the first round. He followed up with a hammer fist on the ground, but it wasn’t needed. Referee Mike Beltran jumped in to stop the fight at 3:02 of the first, ruling it a knockout.

“After I punched him, I see he was going down,” Danho said. “It was perfect for me. … I trained so hard, so long. Now, I’m back. I came back stronger.”

It was the first time Danho, 37, had fought since September 2016, a draw against Christian Colombo. This was the Syria native’s first UFC victory in three tries. De Castro, a 33-year-old Cape Verde native fighting out of Massachusetts, has lost three in a row.

“After five years to come back, it was amazing,” Danho said in his postfight interview. “It’s a good feeling.”

The bantamweight fight was exceptionally well matched, as Shore and Azure each had their moments in the striking and grappling. In the end, two judges sided with Shore via 30-27 scores, while a third had it for Azure 29-28. It is the first split decision win of Shore’s career.

A former titleholder in Cage Warriors, Shore appeared to land the harder shots on the feet, particularly his right hand, but Azure was a little busier according to UFC Stats. Azure out-landed Shore in total strikes 86 to 51. The fight went back and forth all the way through the third round. Shore worked into side mount with two minutes left in the fight, only to eventually get reversed and briefly give up his back.

Saldaña was the more effective striker. Griffin nearly got a finish on the ground.

In the end, the judges gave the nod to Saldaña and his proficiency on the feet. Saldaña picked up a unanimous decision (29-28, 29-28, 29-28) victory in his UFC debut. It wasn’t a blowout. In fact, it was pretty even throughout.

Saldaña had a strong first round on the feet, landing right and left hands from various stances and a pair of leg kicks that took Griffin off his feet. Griffin got Saldaña’s back in the second round and nearly finished with a rear-naked choke, but Saldaña held on and was saved by the bell. Both men were tired in the third round, but Saldaña landed some solid shots in the standup.

Saldaña, 30, has won five straight. The Iowa native, who fights out of Fight Ready in Arizona, was coming off a third-round TKO over Vince Murdock on Dana White’s Contender Series last November, which earned him a spot in the UFC. Griffin, a 31-year-old Milwaukee native, has lost four of his past five fights.

Knight is pound-for-pound one of the strongest men in the UFC with one-punch knockout power to boot. Jung nullified it all with a wrestling-heavy attack.

Jung took Knight down eight times en route to a unanimous decision (30-26, 30-26, 30-27) win. Every time it appeared like Knight was having any success on the feet with big overhand rights, Jung would close the distance, wrap his arms around Knight in a body lock and trip him down to the canvas.

In his UFC run, Jung had never landed a takedown before. But he saw the weakness in Knight’s game and capitalized on it — over and over.

Jung’s best round was the second. He had Knight’s back, flattened him out and was raining down punches and elbows on him. Knight survived, but he was bloodied and his face was painting the canvas red while he was in that belly-down position.

Jung, 27, is unbeaten in 14 straight fights and appears to be a legit prospect in the 205-pound division. The South Korea native is 3-0-1 in the UFC with the lone blemish a draw against Sam Alvey in his last fight in October. Knight, a 33-year-old New Hampshire native, had a three-fight winning streak snapped.

No hooks? No problem.

Kasanganay latched on to a tight choke early in the second. He didn’t fully take Palatnikov’s back and never got his legs around him to get his hooks in. But it didn’t matter. Kasanganay squeezed Palatnikov’s neck with Palatnikov in the turtle position and got the tap at 26 seconds of the second round.

Kasanganay, who has been known as a striker, went to his wrestling early in the first round with some good effect. He got Palatnikov down and worked for an arm triangle. Palatnikov was able to get back to his feet and land some shots in the clinch in what was a very close opening round.

The second round didn’t last long. Kasanganay landed a right hand behind Palatnikov’s ear, sending him reeling. Kasanganay jumped into a choke and that was it.

Kasanganay, 27, rebounded from a highlight-reel knockout loss to Joaquin Buckley last October and has now won two of three in the UFC. The North Carolina native is now training out of Sanford MMA in Florida. Palatnikov, a 32-year-old Hong Kong native fighting out of Las Vegas, had a two-fight winning streak snapped. 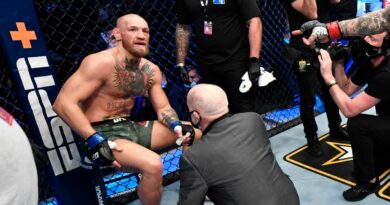