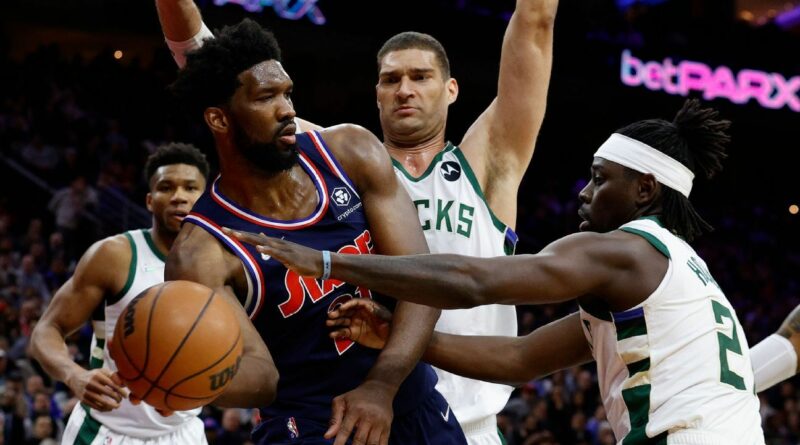 It’s Friday — the last one of the regular season! — and you know what that means: We explore 10 more things from the NBA world, including nifty dimes from Joel Embiid, mastery from Luka Doncic, Jayson Tatum reaching basketball nirvana and season-ending fashion advice.

Praise for Embiid’s improved passing has focused on those domineering possessions in which he lords over the action — directing cutters, triggering rotations, whipping crosscourt passes. He is dishing a career-best 4.2 dimes, and his turnover rate shrinks every season. He is a truly majestic force.

But watch for those inside-out slingshots in which the ball leaves Embiid’s hands almost the instant he touches it.

One key to being a great passer — particularly a great post passer — is understanding when to hold the ball and suck in the defense, and when to get rid of it right away. There is no need to draw help defenders any further when they are pre-rotated toward you — leaning into the paint, at the mercy of their own momentum.

James Harden is broken right now as a scorer, but the Harden-Embiid pick-and-roll is as dominant as advertised. It is generating heaps of easy buckets for Embiid. Before the trade, Embiid set about 41 ball screens per 100 possessions and rolled to the rim on 37% of those plays, per Second Spectrum. Alongside Harden, Embiid is setting 46 picks per 100 possessions and rolling 51% of the time.

He is shooting and drawing fouls more often on those plays. Embiid is so skilled that catching around the foul line with some airspace amounts to a layup for him.

The Philadelphia 76ers are averaging 1.17 points per possession when Embiid rolls after screening for Harden, catches the ball, and finishes the play, per Second Spectrum. That would lead all high-volume screeners.

If I’m scheming against the Harden-Embiid dance, my No. 1 priority might be preventing Embiid from catching pocket passes — even if it means playing Harden slightly for the drive. Given how Harden has looked recently, I’d rather force him to finish over a decent contest — especially given playoff officiating tendencies — than concede slicing interior touches to Embiid. (Seriously: we are like one bad Harden playoff game from his play becoming a crisis, if it isn’t already. The other alternative against the Harden-Embiid dance is swarming both of them, and daring Philly’s shooters to beat you.)

Their pick-and-roll chemistry is probably one reason Doc Rivers occasionally rested Harden and Embiid together. The gut reaction is to object: Shouldn’t Rivers stagger them? Maybe? Probably?

But resting Embiid and Harden together also maximizes their minutes together. There is a happy medium, too. I can’t wait to see where Rivers ends up.

2. What the numbers see in Nikola Jokic’s defense