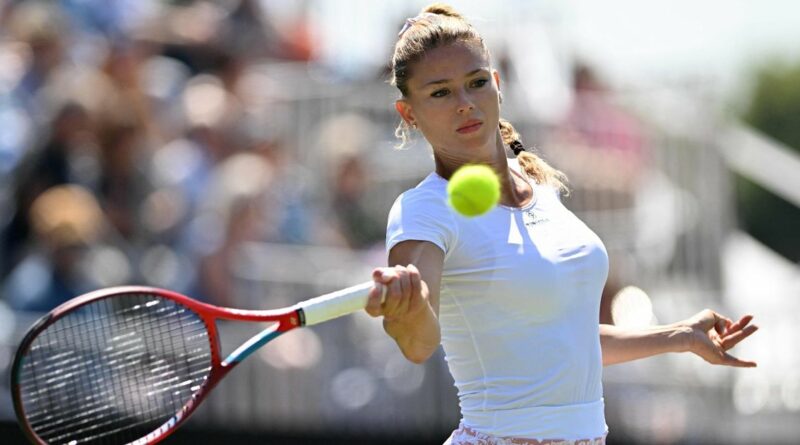 Tennis's annual party at SW19 will be in full swing for the first time since 2019 this summer as Wimbledon looks to crown its latest King and Queen of the court.

However, as some players are looking to impress on the court, others will be turning heads off it thanks to their stunning looks. From blonde bombshells to burgeoning stars, Wimbledon has it all.

And Daily Star Sport is looking at seven stars who could be ready to heat it up on centre court this summer. So without any further ado, here are the seven stars you should be on the lookout for…

Camila Giorgi is no stranger to success in London, and in 2018 she reached the quarter-finals of Wimbledon – and she even snatched a set off Serena Williams in a losing effort.

However, Giorgi is perhaps best known for his risque snaps on Instagram these days, and she brought in the New Year with a series of lingerie pics on social media.

The Italian will kick off her Wimbledon campaign against Magdalena Frech on Tuesday.

Will you be tuning into Wimbledon? Let us know in the comments section below

Paula Badosa is definitely a citizen of the world, and the stunning brunette was born in New York, lives in the UAE, but competes under a Spanish flag.

The Spaniard is currently having the season of her life, and she rose to World No.2 after a semi-final appearance at the Stuttgart Open – Badosa has since slipped to fourth.

Badosa will also get her Wimbledon campaign underway on Tuesday against Louisa Chirico.

The first, and only, British representation on our list is Leicester's own Katie Boulter.

Boulter is ranked as No.4 in the British rankings – the top spot being taken, of course, by Emma Raducanu. Boulter has two previous Wimbledon appearances to her name: twice reaching the second round in 2018 and 2021.

Boulter will also kick off her campaign on Tuesday as she takes on France's own Clara Burel.

22-year-old Dayana Yastremska has already had to deal with a lot at her tender age.

Her home city, Odessa, remains under siege following Russia's invasion of Ukraine in February – the same reason why Russians are banned from Wimbledon. In 2019, Yastremska made it to the fourth round of tennis' premier competition.

Since then, Yastremska has served a doping ban and slipped outside the top 100, she starts her Wimbledon campaign against Ana Bogdan.

23-year-old Mirjam Bjorklund is gearing up for her first Wimbledon outing having already battled through three qualifying matches.

The stunning Swede had a slightly different route to London, with every other player on this list warming up in Eastbourne. However, Bjorklund took her looks and talent to Yorkshire to compete in the Ilkley Open.

Yulia Putintseva's involvement in this year's tournament is slightly controversial.

Putintseva was born and raised in Moscow, and she initially represented Russia when first breaking onto the circuit. However, in 2012, she switched alliances to Kazakhstan, allowing her to avoid the blanket ban on Russian athletes imposed this year.

The Kazak will face French star Alize Cornet on the opening day.

The second Ukrainian to make the list is Katarina Zavatska, but the 22-year-old's Wimbledon dreams have already been dashed.

Like Bjorklund, Zavatska had to navigate the lottery of qualifications due to her WTA ranking. After brushing off competition for the first two rounds, Zavatska finally fell short battling Croatian Jana Fett.

Zavatska has made it to the competition proper at a Grand Slam on three occasions: once stateside and twice at Roland Garros.

First responders from OKC bombing, 9/11 to meet in emotional tribute at Knicks-Thunder game

76ers victim of Heat’s zone in first loss at home