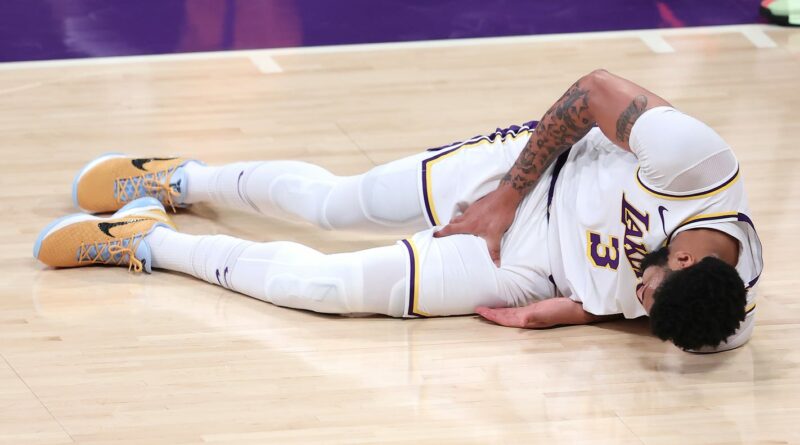 LOS ANGELES – If Anthony Davis had his way, he would play when the Los Angeles Lakers play the Phoenix Suns on Tuesday in Game 5 of their first-round series. But the Lakers have listed him as questionable after an MRI taken on Monday confirmed that he has a strained left groin.

“These guys are great competitors. They’re always going to say, ‘I’m ignoring this; I’m going to be in there,’” Lakers coach Frank Vogel said following Monday’s practice. “That’s what his mindset is, like any competitor. But we’ll see what the groin feels like tomorrow, and we’ll make a smart decision. But he’s in great spirits.”

Davis did not speak to reporters both after Monday’s practice and following the Lakers’ 100-92 Game 4 loss to Phoenix on Sunday, which tied the series up at 2-2. Davis  injured his left groin after landing hard on the floor following a missed layup with 48.3 seconds left in the first half. Davis stayed on the court in pain before eventually standing up without assistance. After hunching over in pain underneath the Suns’ basket, Davis then walked slowly toward the Lakers’ locker room. He did not return to the game after halftime, and the Lakers officially ruled him out with about eight minutes left in the third quarter.

DON'T MISS A THING: Sign up for our sports newsletter for daily updates

Davis had six points on only 2-of-9 shooting while nursing a sprained left knee that developed in Game 3 following a chase-down block on Suns guard Devin Booker with 2:30 left in the first half. But Davis stayed in the game and finished with 34 points on 11-for-22 shooting. Davis also had missed a combined 30 games this season because of a strained right calf.

“He’s one of those players that dominates both sides of the ball,” Vogel said. “We’re going to miss his scoring and everything he brings to the table offensively. But what he is defensively is deeply going to be missed with his ability to guard on the perimeter. We’ll definitely miss him on both sides of the ball if he does not play.”

While the Lakers lack clarity on Davis’ availability, they have some relative optimism on the Lakers guard Kentavious Caldwell-Pope. Vogel said he feels “hopeful” that Caldwell-Pope will return in Game 5 after missing Game 4 because of a left knee contusion. Caldwell completed pregame warmups, but did not play after still feeling soreness. Caldwell-Pope said he is “feeling better and better” after completing a light workout during Monday’s practice.

Government to give rugby, racing and others £300m aid package – but not football

Lowe: LeBron vs. Giannis, Ja vs. Zion and the big awards debates