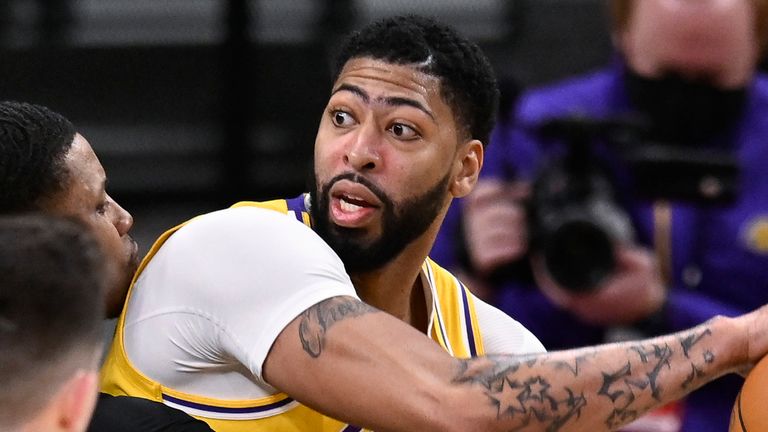 LeBron James had a triple-double and Anthony Davis led the game in points as the Los Angeles Lakers defeated the San Antonio Spurs, while a Luka Doncic double-double led the Dallas Mavericks to victory over the Miami Heat on Friday night.

Mike Conley starred in the Utah Jazz’s win over the Los Angeles Clippers, the Ja Morant-less Memphis Grizzlies overcame the Charlotte Hornets, and Kevin Durant’s game-high 28 points weren’t enough for the Brooklyn Nets in their loss to the Atlanta Hawks.

Anthony Davis had 34 points and 11 rebounds alongside LeBron James’ 26 points, 11 rebounds, 10 assists and two steals as the Lakers defeated the Spurs 109-103 for their second victory in the matchup in three days following Wednesday’s 121-107 win.

A tip-in by Kuzma and a bucket inside by James put the Lakers up 107-103 with 28.6 seconds remaining. After Derrick White misfired on a jumper, Davis sealed the win with a pair of free throws. Neither team led by more than seven points.

In addition, Dallas snapped their six-game losing streak to Miami in a rivalry that has seen the teams split matchups in a pair of NBA Finals.

Miami’s biggest issue on Friday was its shooting. The Heat missed their first 14 three-point attempts, finally sinking a long-range shot when Duncan Robinson converted with 9:07 left in the third quarter.

Heat star Jimmy Butler returned after missing two games due to a sprained right ankle, but he was held to two points, three rebounds and two assists in 27 minutes. Miami’s Bam Adebayo produced his second straight double-double with 19 points and 11 rebounds. He also had a game-high four steals.

Tim Hardaway Jr., who played high school ball in Miami and is the son of a former Heat star, scored 18 points, while former Heat players Josh Richardson (11 points) and James Johnson (eight points, all in the second quarter) also contributed.

Mike Conley scored 33 points and hit a career-high-tying seven three-pointers to lift the Jazz to a 106-100 victory over the Clippers.

On a night when Jazz leading scorer Donovan Mitchell had a quiet outing with just 15 points, Conley picked up the slack for Utah with his first 30-point game since March 2019. Conley scored seven of the Jazz’s last nine points, hitting a shot-clock-beating three-pointer and sinking four free throws in the final 1:48.

Paul George scored 25 points to lead the Clippers, who had won four of their previous five games. Kawhi Leonard, sporting a mask for his injured mouth, contributed 20 points, 16 rebounds and nine assists.

George refused to let the Jazz cruise to a win down the stretch, draining three three-pointers in the final three-and-a-half minutes to keep Los Angeles within striking distance.

The Jazz led by as many as 20 points, but the back-and-forth game got exciting after the Clippers’ Nicolas Batum sank three consecutive free throws and George hit a three-pointer to cut Utah’s lead to 95-94 with 3:15 to play.

Rudy Gobert, who finished with 12 points and nine rebounds, put Utah up 102-94 with an inside hoop, giving the Jazz enough cushion to hand the Clippers their sixth straight loss in Salt Lake City.

Dillon Brooks scored 21 points as the short-handed Grizzlies didn’t seem fazed without one of the NBA’s top players, trouncing the Hornets 108-93.

The Grizzlies won for the first time without Ja Morant, who will be out for at least about a month after sustaining an ankle injury earlier in the week.

Kyle Anderson notched 18 points and 11 rebounds, Brandon Clarke added 15 points and Jonas Valanciunas and Gorgui Dieng each had 14 points for Memphis. Desmond Bane chipped in with 10 points and Tyus Jones contributed 12 assists with just one turnover.

Bismack Biyombo had 16 points and 12 rebounds and LaMelo Ball provided 15 points, while Gordon Hayward and Caleb Martin both posted 14 points for the Hornets, who had their two-game winning streak snapped.

Memphis shot 14-for-39 on three-point attempts and won despite going to the free-throw line for only 10 attempts (making eight).

The Hornets, who led the NBA in fast-break scoring, were without a fast-break point until the third quarter. They finished with 18 turnovers and a 41 percent shooting rate from the field.

De’Andre Hunter scored 23 points, Trae Young added 21 points and the Hawks never trailed in continuing their quick start with a 114-96 victory over the Nets.

The Hawks ended a six-game losing streak in Brooklyn and rebounded nicely from allowing 145 points in Wednesday’s four-point loss to the Nets.

Hunter made his first five shots and made nine of 10 overall, while Young made seven of 21 shots and only got to the free throw line four times. He added seven assists.

Kevin Durant led the Nets with 28 points on 10 of 21 shooting alongside Kyrie Irving’s 18 points and 11 rebounds from six of 21 from the field accounted for two of 11 out of the team’s 30 of 37 from deep as the Nets lost for the third time in four games.

Want to watch even more of the NBA and WNBA but don’t have Sky Sports? Get the Sky Sports Action and Arena pack, click here

NBA Strike Will be Meaningless if Players Don’t Start Voting

Hall of Famer Jim Rutherford resigns as GM of the Penguins due to personal reasons
We and our partners use cookies on this site to improve our service, perform analytics, personalize advertising, measure advertising performance, and remember website preferences.Ok