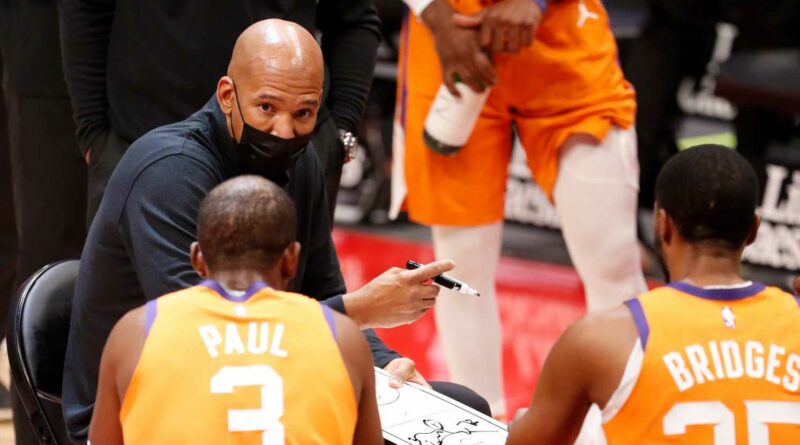 The recent 21-point loss bothered Phoenix Suns coach Monty Williams. So did the cloth that has covered up his face for almost the whole game.

“I’m so tired of adjusting my mask,” Williams said following the Suns’ loss to the Washington Wizards on Monday. “I’m no good at it.”

The reason? A handful of NBA coaches, including Williams, observed that players struggle hearing them. As Sacramento Kings coach Luke Walton cracked, “at least they tell you they can’t hear you, maybe they can and they just choose to use the mask as a way not to do things.”

As coaches have experienced for the past three weeks, the adjustments go beyond their comfort level with wearing a mask throughout games to mitigate risk with the coronavirus. Since the 2020-21 season began, the league has seen four postponed games because of diminished rosters stemming from positive tests and contact tracing. Teams have also faced stricter practice and game-day routines because of safety protocols.

“Am I comfortable? I have immense great trust in what the league is trying to do,” Williams said. “I really do. At the same time, we’re not in a bubble anymore.”

Once the NBA restarted last season on a quarantined campus near Orlando last summer, the league oversaw zero positive tests among players, coaches and players. In addition to daily COVID-19 tests, enforced social-distancing and mask-wearing rules, the NBA could keep its teams out of harm’s way since they stayed in the same location without anywhere else to go.

With teams no longer confined to a bubble, they are now more vulnerable to the outside world. On the second day of the season, the Houston Rockets-Oklahoma City Thunder game was postponed because the Rockets did not have enough players due to positive infections and contact tracing.

“We have confidence in the NBA. But the problem is how contagious this thing is and the numbers that just keep going up,” Walton said. “Even if you do everything perfectly safe, there’s hundreds of thousands of people getting it every day.”

Therefore, the NBA said the league and the National Basketball Players Association planned to talk Monday about modifying health and safety protocols. General managers met on Monday, and the league’s Board of Governors plan to speak Tuesday.

“They’re just going to tighten up some things in terms of testing for people in households and things of that nature,” said Portland Trail Blazers guard C.J. McCollum, who serves on the executive committee with the NBPA. “Obviously the positive (tests) are rising and we’ve been (postponing) some games. We’re just figuring out ways to tighten things down, whether that’s shootaround or postgame interactions. They’re just trying to tighten things up and limit our risk with player-to-player contact.”

'Living my life in a box'

The NBA had already tightened things up. Before the season, it outlined an 158-page health and safety protocols in hopes to account for teams playing in home arenas, flying on private planes and visiting hotels.

Both at home and on the road, participants cannot visit bars, lounges, clubs, public gyms or any indoor gatherings of 15 people. They have limited eating options, including restaurants with either outdoor dining or fully privatized space indoors. And they cannot take public transportation, including Uber.

As Portland Trail Blazers guard Damian Lillard said, “I feel like I’m living my life in a box.”

Still, the NBA and its players have no intention with canceling or postponing the season.

“It’s definitely tough. But if we don’t accept that’s the way it has to be, we lose out on a lot of things — our health, our contracts,” Lillard said. “Everything goes downhill if we don’t play by these rules. Obviously we’re going to make it work to the best of our ability. We’ve been doing a really solid job of that.”

Since Dec. 2, 15 players have tested positive for COVID-19. In addition to the four postponed games, two games featured a team with only eight healthy players, the minimum to still play a game.

The NBA anticipated such scenarios. It also released the first half of the season’s schedule through March 4 in case it needed to reschedule postponed games.

“I don’t have any answers. It’s a lot bigger than me,” Suns guard Devin Booker said. “Whenever we have a game scheduled or practice scheduled, I try to be ready to play. But there’s a lot going on. We read it. We see it. But we can’t control much of it.”

During this week's talks, the NBA might try to exert even more control.

To account for awaiting test results and minimize worries over safety protocols, some teams have canceled shootarounds. Depending on a city’s policies, teams have mixed restrictions on holding meetings, film sessions or workout sessions at the team hotel. If more restrictions are enacted, coaches fear that could lead to inconsistent performances and more injuries.

“You need practice time. You need them on the floor,” Washington Wizards coach Scott Brooks said. “We’re going to have to figure out things differently than a normal NBA season. We can’t use this as an excuse.”

In typical seasons, rarely have teams worried about having at least eight players available for a game. Teams can have up to 17 players on their roster. That has not always been enough. The Philadelphia 76ers played against Denver on Saturday with only seven healthy players after making previously injured forward Mike Scott available on the active roster.

Amid these developments, should the NBA increase the minimum number of healthy players needed to hold a game?

“To have a healthy chance of playing an NBA game, the number should be nine,” Sixers coach Doc Rivers said. “Because of eight, you’re taxing guys that play 40 minutes or more. Usually, those are the guys that haven’t played.”

Therefore, that could threaten both that team’s ability to win and the league’s competitive balance. But coaches are not advocating for the NBA to allow teams to expand their roster size, either.

“I don’t think that increases your competitive advantage at all," Rivers said. “When you’re talking about increasing your roster size for guys that aren’t even in the league, I don’t know what that does. It does allow you to play the games. But let’s just be honest. If you’re missing your stars or your key guys, you can have a roster size of 40 and it’s not going to make a big difference.”

If anything, that could just increase risk.

“The easy answer is ‘Give us more players, give us more active players.’ But I think the NBA looks at it as the more people we put into this group, the more likely somebody is going to get (the virus),” Walton said. “Then it starts spreading through the group. They’re trying to find whatever the perfect balance is.”

No wonder, Rivers conceded it is “a tough call” for the NBA to figure out what that balance entails.

“We don’t know what’s going to happen. Our season is day-to-day,” Trail Blazers forward Carmelo Anthony said. “It’s not like we can look forward to next week’s games or a certain road trip. We have to focus on the next day and getting through this day.”

“That’s the toughest thing. Even when you try to call out a play, they’re calling out plays from the side," Williams said. "I don’t think the players hear us. I think they just hear a bunch of noise.”

Amid all the noise about postponed games and increased infection rates, however, players and coaches still have expressed trust in the NBA to make adjustments.

“I don’t know what all goes into the decisions on the safety protocols. But I do know this and a thousand percent confident on this — the NBA is going to do what’s right for the players,” Brooks said. “If the players need to sit out, you have to sit them out. If they can play, they can play. They’re not going to put any of us in harm’s way.”