The Hawks did Lloyd Pierce cold.

The popular Atlanta coach was sacked on the spot Tuesday morning (AEDT).

He reportedly conducted the team’s routine, scheduled training session earlier in the day and then was told hours later he no longer had a job.

The Hawks made the dramatic decision to move on from Pierce following a 109-99 loss at Miami on Monday, which left them 14-20 for the season, facing an uphill battle to sneak into the Eastern Conference playoffs.

The Athletic’s Chris Kirschner reported on Twitter: “One Hawks player told me he found out Lloyd Pierce was fired from Twitter. There was no heads up.

“Pierce coached the team in practice today in Miami.”

It is a wildly unpopular move after Pierce became a hugely popular figure in the Atlanta community for his high-profile leadership and public appearances during the initial stages of the Black Lives Matter movement.

The Hawks made the call anyway.

According to reports assistant coach Nat McMillan has been offered the position as interim head coach, but the mentor is hesitant to accept the position out of loyalty to Pierce.

“We would like to thank Lloyd for his work and commitment to not only the Hawks organisation but the city of Atlanta,” Hawks president Travis Schlenk said.

“He and his wife, Melissa, are tremendous people who have made a positive impact throughout the city.

“We have high expectations for our team on the court and we believe by making this change now that we can have a strong second half of the season.”

Pierce took over the rebuilding franchise in 2018 and has been hit with injuries to key rising stars in 2021, including star Bogdan Bogdanovic. 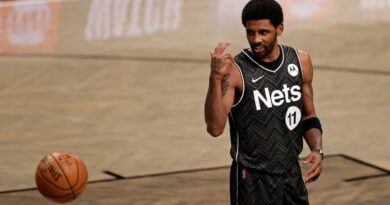