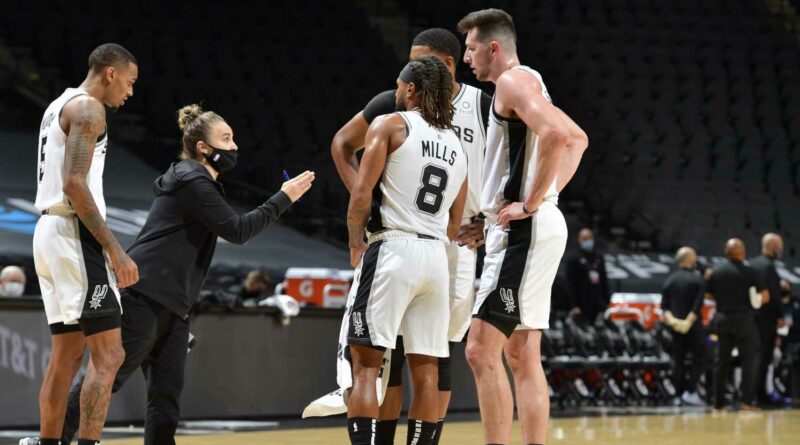 Shortly after waking up Thursday at his home in San Antonio, Logan Riely was told Vice President-elect Kamala Harris had retweeted one of his photos.

Yes, really, the photo that helped capture history Wednesday night when Becky Hammon, the top assistant coach for the San Antonio Spurs, became the first woman to serve as head coach in an NBA game.

It happened when Spurs head coach Gregg Popovich was ejected during the second quarter of the team’s game against the Los Angeles Lakers. As Popovich left the court, he pointed to Hammon. She promptly assumed head coaching duties.

Riely's photo shows the Spurs coming out a timeout and Hammon, 5-6, commanding the attention of four players, two of whom are more than a foot taller than her.

Spurs coach Becky Hammon talks to her team during Wednesday's game in San Antonio. Hammon made history when she took over as head coach after Gregg Popovich was ejected. (Photo: Logan Riely, NBAE via Getty Images)

Wearing all black, hair pulled back into a bun, Hammon, 43, is leaning slightly forward. Extending her right arm for emphasis. Looking at the players with intensity.

However, Riely’s memorable photo includes a footnote: It was actually taken minutes before Popovich was ejected with 3:56 left in the second quarter. He received two technical fouls for arguing with officials.

“Congrats, @BeckyHammon,'' tweeted Harris, the first woman in U.S. history to be elected Vice President. “You may be the first, but I know you certainly won't be the last.’’

Congrats, @BeckyHammon. You may be the first, but I know you certainly won’t be the last. https://t.co/dHXa9JFRWT

Riely, team photographer for the Spurs, let out a chuckle as he read the tweet, attached to an ESPN story about Hammon’s historic night.

“Oh, wow,’’ said Riely, 27 and barely out of his rookie year as an NBA photographer.

His photo also caught the eye of Donna de Varona, who won two gold medals in swimming at the 1964 Olympics and was one of the first women to break into sports broadcasting.

“I love it,’’ she said of the photo. “Here’s this little tiny woman and these guys, they’re intent. They’re listening. They’re respectful.’’

The way de Varona sees it, this history began unfolding before Riely was even born, much less old enough to pick up a camera. It was 1990 and de Varona did a story on the first woman to serve as an assistant coach on a Division I men’s basketball team.

Rick Pitino, then head coach at Kentucky, had hired Bernadette Locke-Mattox as member of his coaching staff.

“He was one of the first to get it,’’ de Varona said of Pitino. “He felt that she could communicate with the players in a different way than he could.’’

Riely was studying photojournalism at Ohio University when Hammon, who was a six-time WNBA All-Star, first made history in the world of men’s sports.

In 2014, she became the first full-time female coach in any of the four major professional men's sports leagues when she joined the Spurs coaching staff as assistant. History continued to build.

In June 2018, Hammon was promoted to top assistant after James Borrego left the Spurs to become head coach of the Charlotte Hornets. Inevitability hung in the air.

Since 1996, the yeah he took over as the Spurs head coach, Popovich had been ejected 25 times —more than any other NBA coach over that same period. When he was ejected last, Nov. 16, 2019, Tim Duncan took over the head coaching duties. But Duncan is gone.

When Popovich left the court Wednesday night, he made it clear Hammon was in charge. Riely’s photo made it clear the players understood.

Brandi Chastain, the retired soccer star, took note of the photo. Of course she was the subject of perhaps the most iconic in women's sports history — one in which she ripped off her jersey in celebration of her game-winning penalty kick for the U.S. women's national team against China in the final of 1999 World Cup.

“Honestly, I feel like Becky’s been there forever and that there is nothing unusual about her in that position,’’ Chastain said. “Perhaps that’s because I see Becky as a coach  — not a women’s coach, not a men’s coach — but as a coach. And that picture to me is what a coach looks like when they are giving instructions and encouraging their players during a game.

“So it’s an historic event, but I feel that is exactly where women belong.”

Hammon wasn’t the only one receiving accolades.

“It’s the picture you would want to tell the story,’’ Andy Bernstein, a photographer in his 40th year with the NBA, said of Riely’s photo. “You have to elicit emotion, but you also have to tell the story, and it certainly tells the story.’’

Riely graduated from Ohio University in 2016 and the following year he was in the big leagues — team photographer for the Atlanta Braves. But two years later, he was laid off and spent the next six months freelancing.

Then in September 2019, he was back in the pros — one of the NBA’s 30 team photographers upon accepting an offer from the Spurs.

Riely got help from Bernstein, who in 2018 was named a Curt Gowdy Media Award recipient by The Naismith Memorial Basketball Hall of Fame.

“I helped to sort of coach him along,’’ Bernstein said.“He’s a very likable, coachable guy. Him being the new kid on the block, so to speak, it’s great he came through.''

On Wednesday, Riely used a Nikon D5 with the 70 mm to 200 mm lens. With two remote cameras also in use, he uploaded 933 images during the game and they were transmitted from the AT&T Center, the Spurs’ home arena, to the NBA photo offices in Seacaus, New Jersey

From there an editor selected and captioned 151 of those photos and uploaded them to the New York offices of Getty Images, which distributes photos worldwide.

At the time the photo was taken, the Spurs trailed 53-41 and they ended up losing, 121-107. But it was not a photo of the scoreboard that went viral.

“She’s the center of attention, as she should be," Riely said of the picture worth these 1,000 words.