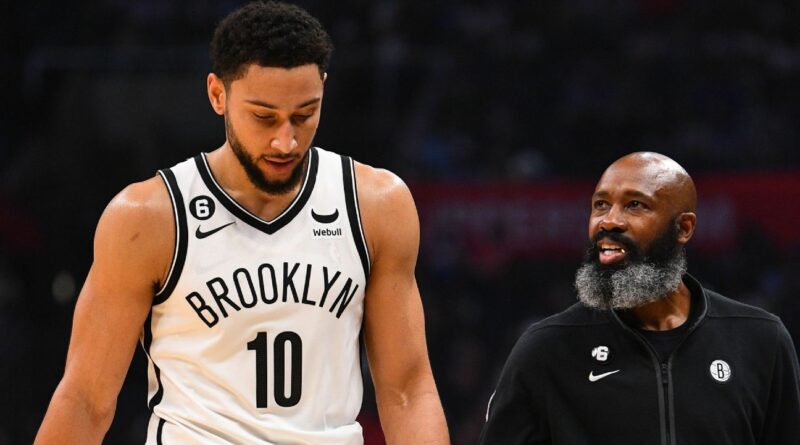 The Brooklyn Nets big man has never doubted that he would get his offensive game back in order as he continues to shake off the rust from missing all of last season, but that particular point about needing to score more and be assertive crystallized during the 109-98 loss to the Boston Celtics on Thursday night. Playing without Kevin Durant, who is sidelined with a sprained MCL, for the first time in his brief Nets career, Simmons missed all three of his shots and did not register a point.

He contributed in a variety of other ways — he had 13 assists, 9 rebounds, 2 steals and a block and was the only Nets player to register a positive number in the plus/minus column (+10).

It was a statistical oddity given that Simmons became just the 18th player in NBA history to register at least 13 assists and not score a point.

“Probably found them too much,” Simmons offered in a postgame assessment of his game, noting he was looking to pass too often to his teammates instead of going to the basket. “Probably need to get my own, get myself going, which I didn’t.”

But he barely looked at the rim for his own shot and even drew some boos in the fourth quarter from the Barclays Center crowd when he turned the ball over on a pass instead of driving all the way to the rim. So how does he think he can get his rhythm back now, especially without the offensive safety net that Durant and his 29.7 points per game regularly provide?

“Being assertive, being aggressive and knowing that my team needs that,” a reflective Simmons said. “I think I’m giving the ball up way too many times when I know who I am, I know I need to get to the rim, get buckets. And that’s also going to help my teammates get them going.”

Nets coach Jacque Vaughn became a member of the club of players who dished out 13 assists without scoring a point as a member of the then-New Jersey Nets in April 2006. He also wanted to keep the focus on Simmons’ defense, instead of the glaring lack of points the former All-Star provided against the Celtics.

“I always look at it as what does the possession render?” Vaughn said. “And so I think he got guys shots throughout the course of the night. My thing is going to be on the defensive end with Ben, the impact that he has to have without Kevin on the floor … Ben’s got to be able to protect the rim.

As far as shots go, Simmons, who is averaging 7.7 points a game this season, is now 10-for-23 in January and just 1-for-13 from the free throw line during December and January. The spotlight is going to get even brighter without Durant for the next few weeks.

Simmons said he wouldn’t call it “pressure” to score more without Durant, but he knows he has to do more without the superstar forward on the floor.