PORTLAND, Ore. – Nuggets coach Michael Malone leaped off the bench faster than any of his players moved all afternoon. Norman Powell’s uncontested, breakaway jam midway through the third quarter was too much for Denver’s fiery coach to stomach.

Malone called timeout, but only to send a message.

The Nuggets’ urgency and commitment in Saturday’s Game 4 wasn’t in the same stratosphere as Portland’s. Facing something akin to a must-win situation, the Blazers did, in convincing, ruthless fashion. Saturday’s final 115-95 margin sets up a pivotal Game 5 of their first-round playoff series in Denver on Tuesday night, with the series tied 2-2.

The good news? The Nuggets went to Portland and wrested homecourt advantage away from the Blazers with their Game 3 win. That didn’t make the ugly nature of Saturday’s game any more palatable, however.

“That’s two games in a row, Game 3, our starters weren’t ready to play,” Malone said. “… Tonight, our starters were awful. … I thought we had some guys that were tentative, that looked a little scared, that played soft.”

Denver’s Nikola Jokic wasn’t the matchup nightmare he’d been throughout the first three games. He missed numerous close, clean looks and finished with 16 points on just 7-of-18 shooting. Because of the rout, Jokic didn’t play in the fourth quarter when Malone emptied his bench.

Michael Porter Jr. wasn’t the offensive focal point the Nuggets needed him to be with Jokic struggling. He looked out of sorts from the jump and tallied just three points on three shots. With the game all but decided  Porter saw only five minutes of action in the second half.

Denver finished the miserable afternoon 13-of-44 from 3-point range.

At the start of the third, the Nuggets were already teetering on the edge given their first-half showing. Barely a minute later, Portland had gashed open the lead to 64-47 on a Powell bucket. Jokic tried to muster an offensive response, yet Portland’s 3-point snipers, including Carmelo Anthony, just kept raining from outside.

Jusuf Nurkic’s swat on JaMychal Green with 5:31 left in the third set Moda Center off, and the Blazers never relented the rest of the quarter. When it was mercifully over, the Blazers had outscored the Nuggets 36-19 in the quarter and opened up a 93-66 lead going into the fourth.

The game felt over long before then.

Following Game 1, Malone mentioned how big an impact Portland’s runs had been in determining the outcome. The Nuggets snatched Thursday’s Game 3, largely because of their ability to curb those swings.

“I think the key is just our defense,” Malone said. “… We always say it is a game of runs, but how you stop a run is by getting stops, by getting gang rebounds and then executing on offense, getting a high percentage look and making shots.

“We know that they’re going to be playing with a tremendous sense of urgency today,” he added. “They do not want to go back to Denver down 3-1. That’s what we talked about after the game, that’s what we talked about this morning. We have to get off to a better start than we did in Game 3, and we have to be ready for how aggressive they’re going to be.”

Denver’s reserves did all they could do in the first half of Saturday’s Game 4. It was the Nuggets’ starters who were most responsible for Portland’s 57-47 lead at the break. Jokic finished the half with 11 points on 5-of-12 shooting, but barely had any offensive support. Defensively, the Blazers made a shift and force-fed Nurkic inside. As a result, Portland made Jokic work a lot more than he had in Denver’s Game 3 win.

Nurkic, Powell and C.J. McCollum all had at least 12 points in the first half.

Most of the issues stemmed from Denver’s offense, which managed only 37% shooting from the field. Porter was a non-threat over the first two quarters, registering just three points on two shots in 18 minutes.

The silver-lining of the first half was the Nuggets’ second unit. The 10-point margin could’ve been stretched even further were it not for Green, Monte Morris and Markus Howard. With Jokic primarily off the court, the trio poured in 17 points to outscore Portland’s bench by 12. Green’s activity, from the floor and on the boards, was impossible to miss. 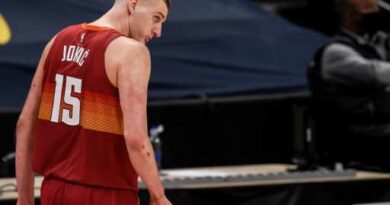 Nuggets journal: And the NBA MVP goes to …

From Dirk to Durant: Five NBA milestones to watch