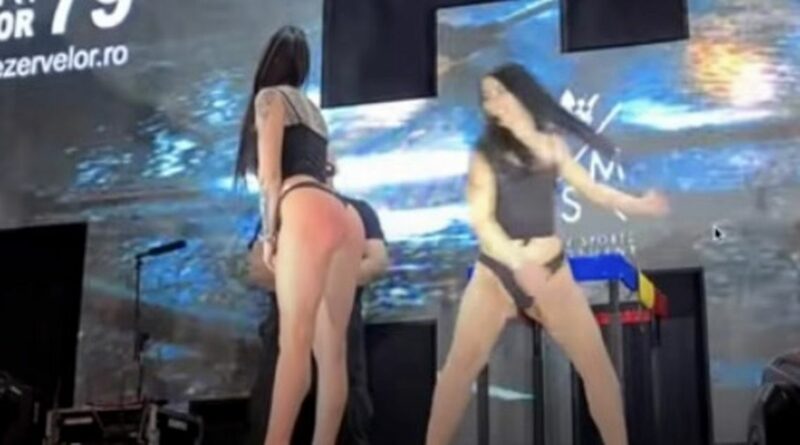 Footage of a bizarre 'booty slapping' contest in Romania has left sport fans in complete awe.

The outlandish 'Booty Slapping Championship' appeared to first gain notoriety in Russia, where fitness models models take turns slapping each other on the bum on stage with the aim of knocking each other off balance.

And the tournament that took place in Romania last year appears to derive from the brutal men's slapping tournament – where competitors ruthlessly hit each other in the face as hard as possible.

The footage resurfacing on social media shows the Romania version involving BB Criss and Andra Brazil competing in their own contest.

READ MORE: Ebanie Bridges reacts to rival accusing her of 'getting her clothes off to be seen'

The duo are seen on stage with two bodyguards and a presenter, who asks questions between rounds of the contest that has been dubbed the 'Slap Girls' Ass' competition.

Clad in underwear and vest tops, the women take multiple turns hitting each other in an event that appears to have less harmful consequences than the men's face slapping battles. But the women involved are still left with raw butt cheeks when the contest is over, and the winner is announced after an audience is shown the damage that each competitor has done.

And the unusual contest involving the Romanian brunette has gone viral on social media, with some fans joking that it should be introduced to the Olympic Games.

What do you think of the booty slapping contests? Let us know in the comments section

One viewer posted: "This is definitely a sport that does deserve a participation trophy." while another added: "This is peculiar but entertaining at the same time."

Another joked: "The rigorous training these athletes must endure to become a champion slapper of asses. Simply amazing and inspiring!"

LeBron James didn't cause me to be miserable in Cleveland, says David Griffin